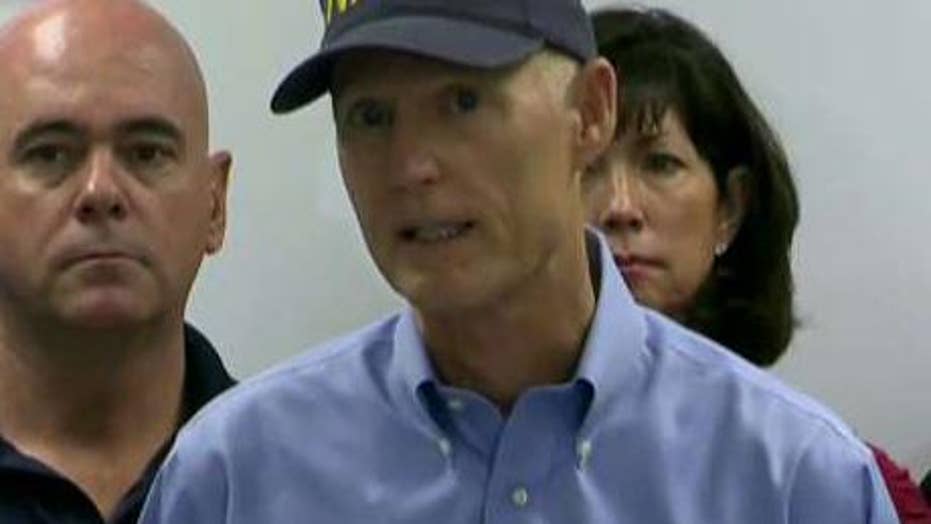 Florida is bracing as Hurricane Irma, the strongest Atlantic hurricane ever recorded, is feared to hit Florida on Sunday.

The hurricane "remains a dangerous and life-threatening Category 5" storm, Florida Gov. Rick Scott warned Wednesday night at a briefing. Forecast models have put the storm on a track to hit Florida over the weekend, but meteorologists have warned its path could change.

Scott said Florida is "at least 48 hours away from feeling the effects of this massive system." The Florida Keys, he said, could feel the effects of the storm Friday night and early Saturday.

Irma continues to pack 185-mph winds and is located about 75 miles north/northwest of San Juan, Puerto Rico, the National Hurricane Center said in a 2 a.m. Thursday ET advisory. It was heading west-northwest at 16 mph.

Hurricane Irma as seen moving through the Caribbean. (NOAA)

Irma "is much worse and more devastating on its current path" than Hurricane Andrew, a Category 5 storm which hit the state in 1992, he said.

The governor also addressed evacuation orders, saying, "If you're told to evacuate, get out quickly." 25,000 people have been evacuated from the Florida Keys, he said.

Officials in the Florida Keys have geared up to get tourists and residents out of Irma's potential path, with mandatory evacuations going into effect Wednesday morning.

"Do not focus on the exact path of this storm," Scott said at an earlier Wednesday briefing. "A storm of this size could have effects statewide and everyone must be prepared."

Broward County Mayor Barbara Sharief said Wednesday that mandatory evacuations have been issued starting at noon Thursday for all residents east of U.S. Route 1, known as Federal Highway, including all barrier islands.

Sharief said 14 emergency shelters will open Thursday at noon, which are "a refuge of last resort." The county does have pet-friendly shelters, with a full list available on the county's website.

Further south, Miami-Dade Mayor Carlos Gimenez said about 2,200 special needs residents have been evacuated, and the evacuations will continue until they’re complete.

Mandatory evacuation orders have been issued for the entirety of zone A, along with zone B barrier islands, in Miami-Dade County, WSVN reported Wednesday night.

“All Florida Navy installations are working through checklists to prepare their installations for the storm,” Bill Dougherty said.

In addition to the evacuation, Navy officials told Fox News warships meant for Hurricane Harvey relief are now being staged to deal with Irma.

The amphibious assault ship USS Kearsarge and smaller USS Oak Hill will remain off the coast of Florida to be ready to support any work related to Irma-relief instead of heading to Texas as previously scheduled.

Additional warships have left port in Florida to evade the storm, according to officials.

Elsewhere in South Florida, Miami-Dade officials have said that residents should indeed be getting ready, with some schools being canceled for the rest of the week, WSVN reported.

“This is a powerful storm which poses a serious threat,” Miami-Dade County Mayor Carlos Gimenez said.

Area residents have filled stores to stock up on supplies, with some locations reporting shortages of water.

Nicole Chery, who was shopping at a Publix in Miami Shores, told WSVN she tried and failed to find water as she prepares for the approaching storm.

The National Weather Service director said Wednesday his staff is "very worried about the impact of winds and surge on the Keys" as Irma approaches.

Director Louis Uccellini says all the hazards will be dangerous with Irma -- that means the storm surge, high winds and heavy rain, and that "very strong winds can do a lot of damage" in an urban environment like South Florida.

The key for Florida and the U.S. east coast is when and where Irma makes a "right turn" and heads north. He says where that happens "depends on a low-pressure system over the Great Lakes region."

To figure all this out, the weather service is using its newest satellite and launching 49 new balloons to gather information for computer models.

The Department of Homeland Security stated in a news release that Immigration and Customs Enforcement, as well as Customs and Border Protection, "will not conduct non-criminal immigration enforcement operations in the affected area," but will be working with local and state authorities "to conduct search and rescue, air traffic de-confliction and public safety missions."

Irma's unknown track has officials north of Florida getting ready for the worst.

South Carolina Gov. Henry McMaster also declared a state of emergency Wednesday, since Irma's path could take the powerful storm through the state.

The declaration allows state officials to set up an operations center at the Emergency Management Division headquarters in West Columbia.