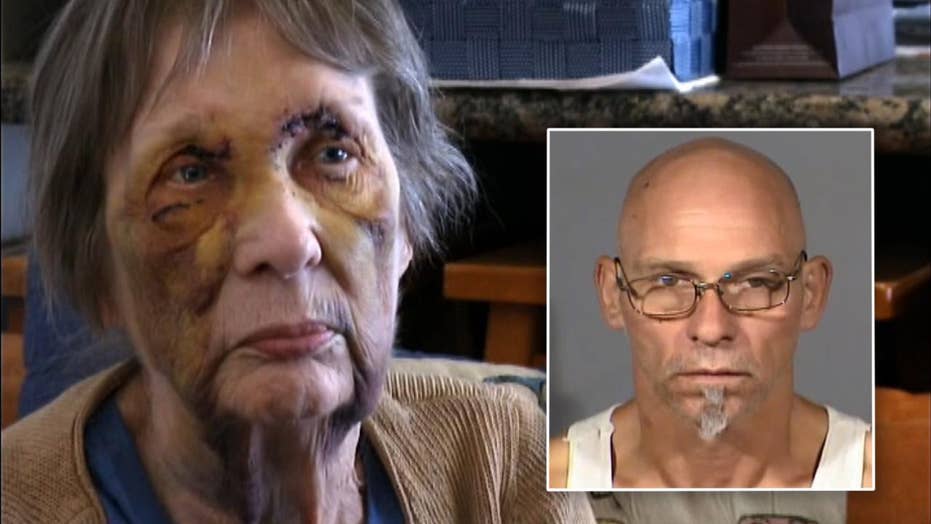 An 80-year-old woman in Las Vegas was nearly killed after a man who was wearing nothing but a baseball cap allegedly invaded her home, then shot her, beat her and attempted to sexually assault her.

The victim -- identified only as Shevaun for safety reasons -- claimed she was beaten, shot and nearly raped by a man, later identified by police as 53-year-old Herbert Scott Rogers, the Las Vegas Review Journal reported.

The incident, which occured Sunday in the woman’s home near Maryland Parkway and Charleston Boulevard, occurred at approximately 8 a.m. when Shevaun was awoken by the sound of rattling dishes. When she went to investigate, she saw Rogers standing in her house, allegedly wearing nothing but a hat.

When Shevaun asked what he was doing in her home, Rogers, who was reportedly armed with a screw driver, replied he was going to rape her, she told the Las Vegas Review Journal.

For over an hour, Shevaun watched, petrified, as Rogers allegedly raided her home, later stealing two bracelets and a strand of pearls. At one point, he slapped her and attempted to sexually assault her, according to the Las Vegas Review Journal. He also told Shevaun multiple times that he would kill her if she moved from the couch on which was sitting, FOX5 reported.

“I got up and headed toward the front door and then he tackled me and said 'get back on the couch,'” she told the news station.

It was at that moment Shevaun remembered she had an antique, .25-caliber handgun hidden under the couch. She had never fired the 1948 handgun, which was a gift from her father to her mother, according to the Las Vegas Review Journal.

But just as Shevaun reached for the weapon, the man wrestled it away from her.

Finally, after about an hour, the suspect turned to leave. Before he left, he allegedly shot the elderly woman in the forehead.

Somehow, the bullet didn’t penetrate her brain; the 80-year-old told the Las Vegas Review Journal she thinks she “jerked her head away” at the last minute, miraculously preventing serious damage.

Shevaun called police at roughly 9 a.m. and was taken to a local hospital where she stayed for three days. She's currently recovering from severe bruising and lacerations. While she has been released from the hospital, Shevaun has not returned home. Instead, she’s being cared for by friend and neighbor Derek Stonebarger at an “undisclosed location,” he wrote on Facebook.

“I wasn’t scared,” Shevaun, a former antiques dealer, told the publication. “I just kept thinking I don’t wanna die this way. I can’t die this way.”

Rogers, who Shevaun helped investigators identify by telling them about the large tattoo of a woman on his arm, was arrested Monday by authorities with the Las Vegas Metropolitan Police Department in connection to the incident. He has since been charged with attempted murder, sexual assault, battery, kidnapping, burglary and robbery, all with a deadly weapon, according to jail records.

Rogers, who is also a registered sex offender, according to the Las Vegas Review Journal, is being held at the Clark County Detention center on $1 million bail.

“I knew she was a tough lady, but the way she spoke to him -- the way she played it cool the entire time. Her strength is remarkable. She’s already talking about testifying against him in court,” Stonebarger, who documented the incident on Facebook, wrote.

According to Stonebarger's post, there is not a fundraiser for Shevaun. Instead, she asks anyone who would like to help her to donate to an animal shelter in her name.

Neither Shevaun nor a spokesperson for the Las Vegas Metropolitan Police Department responded to Fox News’ request for comment Friday morning.