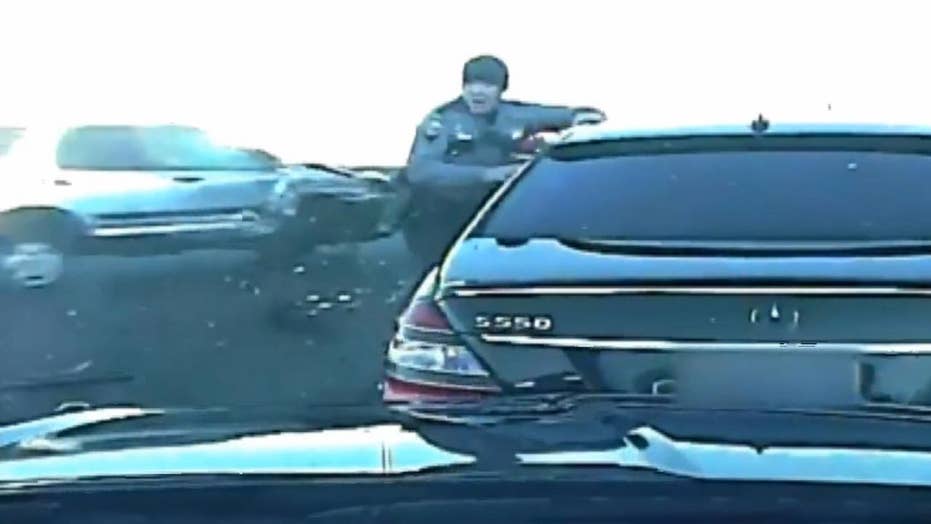 Raw video: Trooper Adam Whitmarsh describes the scary incident where a suspected impaired driver crashed into his cruiser on a Nevada highway.

Adam Whitmarsh, the trooper, pulled over a black vehicle on U.S. Highway 95 for allegedly speeding when the incident occurred, the Las Vegas Review-Journal reported. In the footage, Whitmarsh was heard telling the driver of the black vehicle to “drive safely.”

As he walked back to his cruiser, he stopped and jumped out of the way of an oncoming vehicle. A white SUV crashed into the back of the police vehicle that then hit the back of the black automobile before it careened into the road’s shoulder wall. Debris was seen flying in the air at the time of the impact.

The driver of the SUV, Benjamin Perri, 23, was “jailed on charges of DUI, failing to use a seat belt, failing to use due care, reckless driving, failing to yield to an emergency vehicle and possession of a firearm while intoxicated,” the Las Vegas Review-Journal reported.

“I reacted so fast,” he recalled. “I mean, it happened so fast.”

The trooper told KSNV his father was killed by a drunk driver and the incident reminded him of why he went into law enforcement.

"I kind of hurt myself in the process of doing it. I'm here today, so that's the most important part, I guess,” he said.

The Nevada Highway Patrol said Whitmarsh was “currently on light duty but will return to full duty soon.”