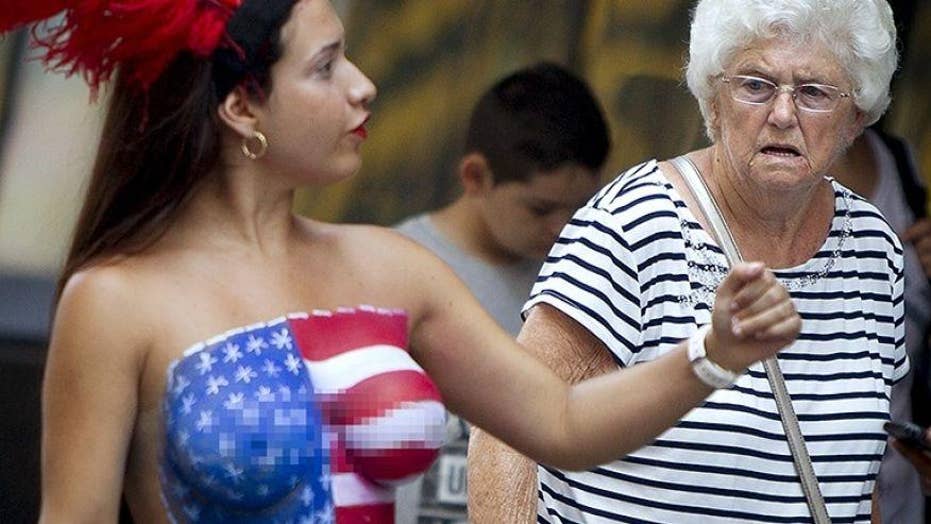 The mostly-nude painted ladies who raunchily stroll through Times Square hunting for tips from tourists have reportedly split into two groups, with one squad of good girls playing by New York City’s rules for street artists and another faction rebelling against the “designated artist zones.”

The “desnudas,” as the painted women are known, have broken down into the polite “des-good-as” and the ill-mannered “des-rude-as,” The New York Post reported on Saturday. And the surly “des-rude-as” are allegedly bullying their nicer rivals.

Onlookers stare at a painted lady in Times Square. (Reuters)

“Sometimes one of us will be working, and they’ll come over and just bump us out of our spots with their hips,” said Jamilee Leary, 19, one of the “des-good-as.”

They are even costing her business, she said.

“They made sure I didn’t get any pictures, not one,” Leary said. “Every time someone would come up to me, they’d grab them and pull them away from me.”

When Leary protested, she said her combative competitors threatened her.

“I told them to stop, but they laughed and said, ‘You wanna fight?!’” Leary told The Post.

A painted lady in Times Square walks near a group of police officers. (Reuters)

The “des-good-as” say they stay in the designated artist zone while the “des-rude-as” disregard the rules and flaunt their stuff wherever they please, often aggressively shaking down tourists for cash.

“We’re sick and tired of them giving us a bad name,” Saira Nicole said. “I just stand there and feel sick to my stomach because I can’t take it anymore.”

But Nicole said there’s a silver lining to following the rules.

“In the time it takes other girls to harass people, we will have taken 10 more photos,” she said.