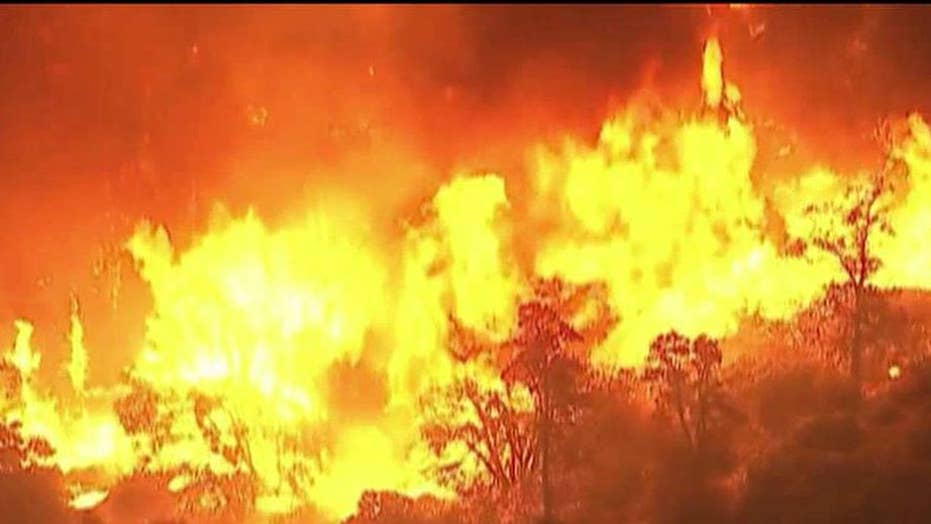 At least a dozen buildings were burned and more than 82,000 people were forced to evacuate their homes as a fast-moving wildfire exploded across the drought-parched canyons in Southern California on Wednesday.

The inferno that started out as a small patch of flame next to Interstate 15 in the Cajon Pass had scorched 15,000 acres of the San Bernardino Mountains. By nightfall, it had churned up and over ridges and was descending into the Mojave Desert.

"The smoke is on the desert floor," said Eric Sherwin of the San Bernardino County Fire Department.

Snaking walls of flame rising 50 to 100 feet high turned nearly two dozen square miles of chaparral to ashes, along with outbuildings and homes in the ranchlands 60 miles east of Los Angeles.

"I can confirm that we've lost structures, both residential and commercial," Sherwin said at the scene of a hard-hit cluster of ranches. "I'm looking up here and I'm seeing buses, I'm seeing outbuildings, I'm seeing houses."

At least a dozen buildings had been torched, including the iconic Summit Inn, an historic diner near Interstate 15.

Mandatory evacuation calls went out to 34,506 homes with more than 82,600 people, ranging for the ski resort of Wrightwood to the sprawling high desert town of Phelan, with more than 14,000 residents.

"This fire is burning in significantly different terrains at multiple elevation levels," making it difficult to fight, Sherwin said.

Hundreds of animals, including dogs and horses, also were evacuated.

Thick stands of drought-stricken brush in the canyons and grass at the lower elevations fueled the wildfire. The flames burned faster in the grassy areas, making them less likely to burn homes but also making them more vulnerable to wind shifts, Sherwin said.

Blue Mountain Farms, a horse ranch in Phelan, was in the path of the fire — just as it was for another fire in the area a year ago.

"Breathing smoke again, just like last year," Shannon Anderson, a partner in the ranch, said as she panted into the telephone. "It's raining ash."

Ranch hands used hoses to wet down fences and anything else that could burn.

Six firefighters were briefly trapped by flames at a home where the occupants had refused to leave, forcing the crew to protect the house, fire officials said.

"We were fully engulfed in smoke," county firefighter Cody Anderson told KCBS-TV. "It was really hard just to see your hand in front of your face."

"We just hunkered down and sat there and waited for the fire to blow over," he said.

Anderson and another firefighter were treated for minor injuries.

Gov. Jerry Brown quickly declared a state of emergency in the fire area, freeing up special resources and funds for the firefight and recovery.

As authorities battled that fire, another major blaze north of San Francisco began to fade and about 400 people in the town of Clearlake were allowed to return home.

Their relief, however, was tempered with anger at a man who authorities believe set the blaze that wiped out several blocks of a small town over the weekend along with 16 smaller fires dating back to last summer.

Investigators in Northern California said Tuesday they had been building a case against the suspected arsonist, 40-year-old construction worker Damin Anthony Pashilk, for more than a year but did not have enough evidence to make an arrest until the weekend blaze ripped through Lower Lake.

Nearly a decade ago, Pashilk was an inmate firefighter while serving time on drug possession and firearms charges, according to California corrections department spokeswoman Vicky Waters. He was completing a five-year sentence when he was assigned to fight wildfires for four months in 2007.

The fire destroyed 175 homes, Main Street businesses and other structures in the working-class town of Lower Lake.

"What I'd do to him, you don't want to know," said Butch Cancilla, who saw his neighbor's home catch fire as he fled on Sunday. Cancilla still doesn't know the fate of his own home and spoke at a center for evacuees set up at a high school.

"A lot of people want to hang him high," his wife, Jennie, added.

An attorney listed as representing Pashilk did not return a call requesting comment. Pashilk is scheduled to be arraigned Wednesday.

Roughly 1,600 firefighters were making progress on the blaze as it burned through wilderness. It was 34 percent contained.