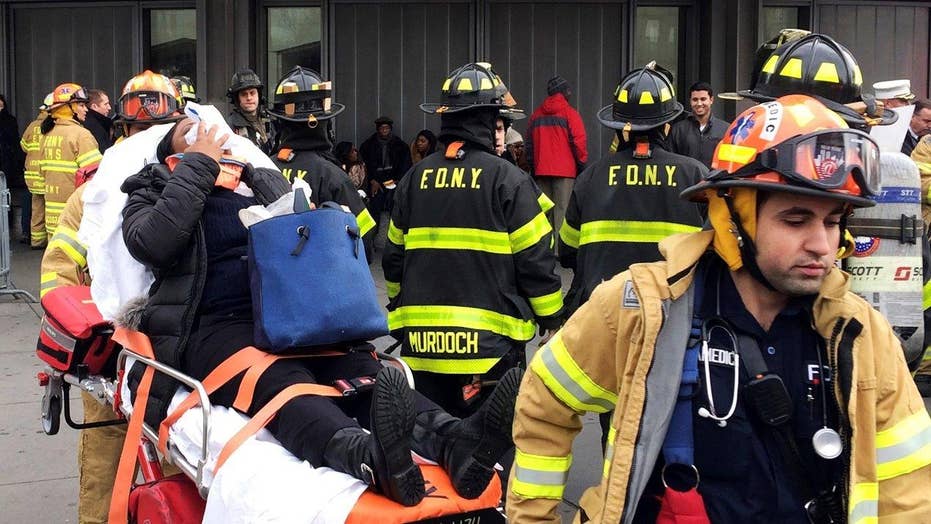 Over 100 injured in train accident in Brooklyn

At least 103 people were injured -- three seriously -- when a commuter train slammed into a safeguard at a Brooklyn station Wednesday morning, forcing part of its first car off the tracks, officials said.

My #LIRR train crashed at #AtlanticTerminal in #Brooklyn. Crazy. Seems only a few people are lightly injured. pic.twitter.com/oXHvy2yxDL

Most of the injuries were considered minor, FOX5 reported.The most serious was a possible broken leg, Gov. Andrew Cuomo said during a news conference.

The Long Island Rail Road train derailed on Track 6 at the Atlantic Terminal around 8:15 a.m. The MTA said the six-car train – carrying 430 passengers -- hit a bumping block at the end of the platform and the lead wheel assembly of the first car went off the tracks after impact.

The injured being brought out on stretchers after @LIRR train derailed at #AtlanticTerminal @fox5ny pic.twitter.com/MqpRGnyyP3

Pictures on social media showed a door at the station with smashed glass and fire and police rescue workers evacuating commuters from the train.

Well, this is one way to start the morning. My train crashed through Atlantic Terminal. Hope everyone else is ok @LIRR pic.twitter.com/q7IV6mJTEm

MTA Chairman Thomas Prendergrast said when LIRR trains make their final approach into a station, it is up to the operator to slow them down.

“There's a signal system that controls it coming in at limited speeds,” he said. “But when you're getting to the end it's the locomotive engineer's responsibility. And the train's brakes have to work. All those things have to be looked at in the investigation.”

New York Gov. Andrew Cuomo said the train came into the station at a “fairly low rate of speed” before it hit the block.

Passengers told TV news crews on the scene that there was a loud bang and a jolt that sent some people flying. The first car of the train left the track, but no others were affected, FOX5 reported.

Some people were carried away on stretchers. Others were sitting outside the train holding ice packs to their heads.

Reports from the scene said some people were bleeding from cuts.

The National Transportation Safety Board was sending a "go-team" to New York to investigate alongside the Federal Railroad Administration.