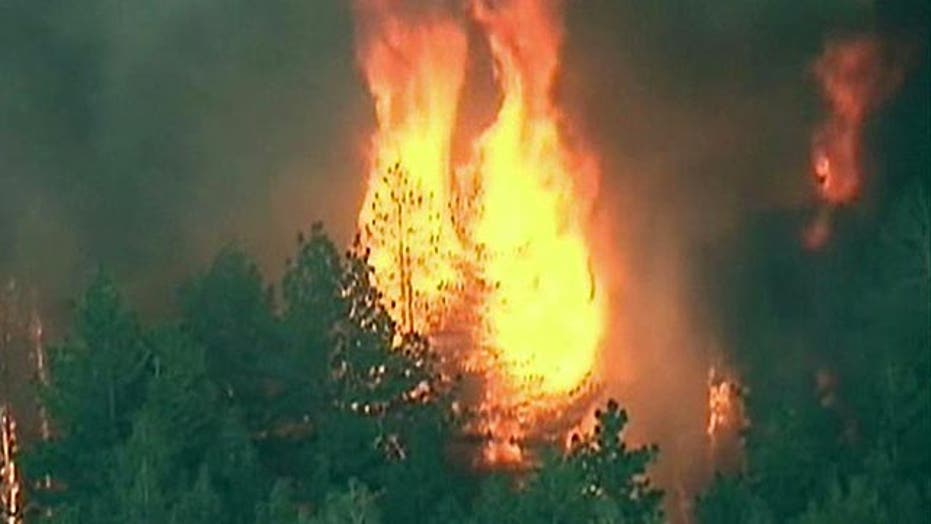 IDYLLWILD, Calif. – Residents of another 700 homes were advised to retreat to safety on Friday as crews fighting a wildfire in the mountains above Palm Springs grew increasingly concerned about the possibility of unstable weather and erratic winds that could last through the weekend.

The voluntary departures by people in Pine Cove, on the fire's western flank, came in addition to mandatory evacuations involving 6,000 others who spent a third day away from home as the fire spread in three directions.

Lt. Gov. Gavin Newsom declared a state of emergency for the area Friday night, freeing up more state funding and other resources to help with the protracted firefight that has already cost $8.6 million.

Some communities on the eastern edge of the fire were reopened to residents, but about 5,600 homes remained under potential threat.

The fire was less than two miles from Idyllwild on its western flank. It was a similar distance from Palm Springs below on the desert floor, where an enormous plume of smoke could be seen, but the blaze was showing little threat of moving toward the much larger city.

A storm front headed toward the region could provide some relief with cooler weather and a chance of rain, fire spokesman Capt. Mike Lindbery said. But it could also make the situation much more volatile with increased winds, thunderstorms and lightning strikes.

Combined with hot air on the ground, the unstable air could create a strong updraft that draws smoke high into the atmosphere, where moisture could freeze and the weight of the ice could cause the column to collapse, creating a powerful downdraft in all directions, Lindbery said.

"We're very concerned because this is the condition in the past that has definitely caused big firestorms and the death of citizens and firefighters," he said.

Popular campgrounds, hiking trails and a 30-mile section of the Pacific Crest Trail, which runs from the Mexican border to Canada, remained closed. A small stretch of a local highway was also closed.

Some 3,300 firefighters, aided by nearly 30 aircraft, battled the fire, which stretched in elevation from 4,000 feet to 9,000 feet along the mountains, putting crews in temperatures from a comfortable 75 degrees to a scorching 110.

The arriving storm front brings a 20 percent chance of rain and 15-24 mph winds, with gusts to 40 mph.

The fire, which began Monday, has burned six homes and mobile homes, one cabin, and more than a dozen other buildings.

Idyllwild resident Steve Hamlet had been watching a growing smoke cloud since Monday and evacuated his home with his 12-year-old grandson as flames crept closer.

On Friday, he worried whether he had packed the right things -- and worried about his wife, who had stayed behind.

"Do I take pictures? Do I take bills? Do I take legal documents? Or do I just take my grandson and I?" Hamlet said at a local evacuation shelter.

He and his grandson tried to check on his wife Thursday but were turned away at a road block after driving 25 miles up the mountain, he said.

"She knows enough when it's time to leave," he said.

Like Hamlet, more than 100 evacuees, including campers rousted from spots in the danger zone, spent the night at shelters located at area schools.

"They're stressed ... and they're anxious to hear news of their homes," said Red Cross spokeswoman Amy Laurel Hegy.

Authorities said the fire was human-caused, but they wouldn't say whether it was accidental or intentional. There have been no reports of injuries.

The fire was about 12 miles from the site of the 2006 Esperanza wildfire that killed five U.S. Forest Service firefighters and destroyed 34 homes and blackened an area that hadn't burned in many years.