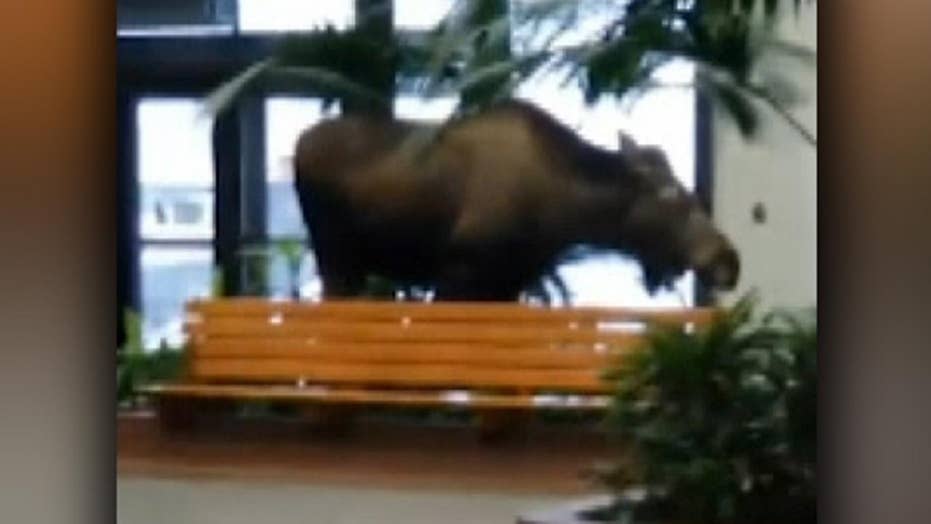 Hungry moose wanders into Alaska hospital and eats some plants

Raw video: Moose walks into the Alaska Regional Hospital in Anchorage, eats some plants and wanders back outside through a motion-activated door.

Doctors, staff and patients at a hospital in Alaska’s largest city got the surprise of a lifetime when a large moose wandered inside for a quick snack.

Video footage captured Monday by a worker at Alaska Regional Hospital in Anchorage shows the moose poking around some greenery near an entrance before it starts gazing in the camera’s direction.

“Didn’t think we’d have a pet moose,” Stephanie Hupton, who works in billing at a physical therapy office inside the hospital and captured the footage, told the Associated Press.

She told KTUU that she started recording after a patient mentioned to security officers that there was a moose loose in the lobby.

“She was just going about her business, having a morning snack,” Hupton said.

A hospital spokeswoman said the moose gained entry into the building after an automatic door got stuck open due to the extreme cold in Anchorage, where temperatures hovered around zero degrees on Monday.

WHALE WATCHERS HAVE CLOSE CALL WITH HUMPBACK IN ALASKA

Kjerstin Lastufka told the AP the plant greenery that attracted the large animal was visible from the outside and likely appeared inviting to the moose. She said the moose ended up eating some of the plants before leaving the building after about 10 minutes inside the warm building.