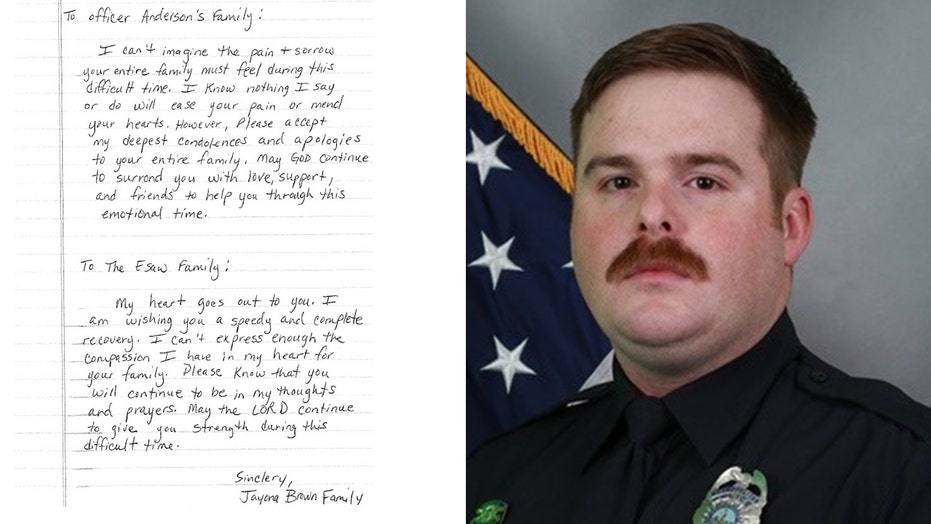 The mother of a teenage girl charged in a car crash that killed a Tennessee police officer on the Fourth of July has released a letter to the officer’s family and the family of her daughter’s passenger, who was seriously injured in the crash.

The mother of Jayona Brown, 17, wrote to Metro Nashville police officer John Anderson’s family on Monday: "I can't imagine the pain and sorrow your entire family must feel during this difficult time."

“I know nothing I say or do will ease your pain or mend your hearts. However, please accept my deepest condolences and apologies to your entire family,” she continued. “May God continue to surround you with love, support and friends to help you through this emotional time.”

Brown’s attorney, Michie Gibson, told Fox News Tuesday that the teen snuck out of her mom’s home early on July 4 with her aunt’s 2016 Ford Fusion.

Metro Nashville Police said an officer tried to pull Brown over but she took off and crashed into Officer Anderson’s patrol vehicle after running a flashing red traffic light, killing him.

Police said Brown was driving without a license. The teen was booked into juvenile detention on charges of vehicular homicide by recklessness, felony evading arrest, aggravated assault by recklessness, driving on a suspended license and juvenile curfew violation.

Gibson told Fox News that “sincere sorrow for the family” is what prompted Brown’s mother to send the letter.

He added, “A person who was just serving and protecting the community, an innocent victim, was killed, is the mother’s concern.”

Gibson said the first thing an emotional Brown told him is, “I didn’t mean to hurt anyone.”

Anderson, a four-year veteran of the Metropolitan Nashville Police Department (MNPD) and a father of an 18-month-old son, was heading to a nearby highway to assist a fellow officer with a pedestrian who was reported to have been in a traffic lane waving his arms, police said.

On Monday, The Metro Nashville Police Department tweeted that the police chief “presented the Medal of Valor, the MNPD's highest honor, to Officer John Anderson's family.”

Anderson’s funeral was held on Monday.

Brown’s passenger, Antona Esaw, was rushed to an area hospital in critical condition after the crash. She has since been released from the hospital, a spokeswoman told Fox News.

In the letter Brown’s mother wrote to Esaw’s family, “My heart goes out to you. I am wishing you a speedy and complete recovery.”

“I can’t express enough the compassion I have in my heart for your family,” she continued. “Please know that you will continue to be in my thoughts and prayers. May the LORD continue to give you strength during this difficult time.”