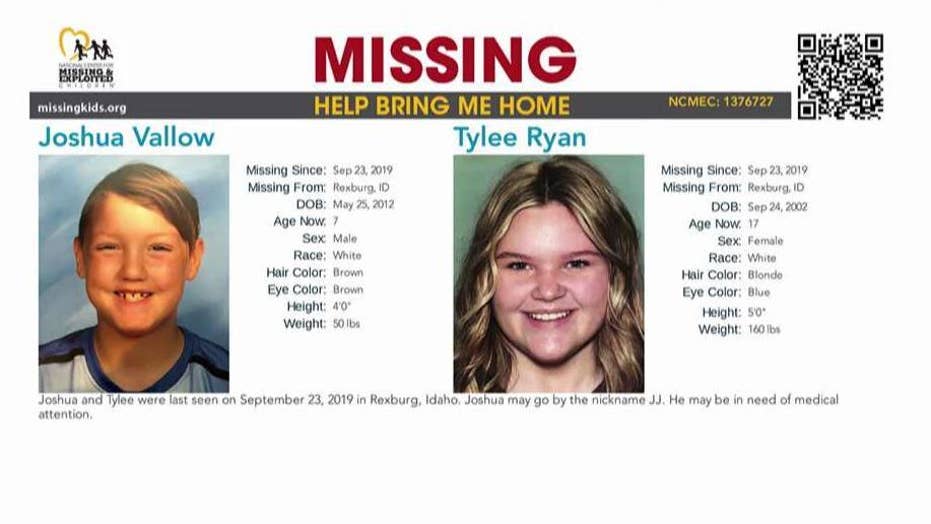 Authorities believe the mother of two Idaho children missing since September knows more than she is revealing; Alicia Acuna reports.

Idaho investigators on Monday said the mother of two children missing since September knows what happened to them but is refusing to cooperate with authorities.

The Rexburg Police Department believes that Lori Vallow Daybell's children, Joshua Vallow, 7, and Tylee Ryan, 17, are not with her or her husband, Chad Daybell, according to a news release.

“We know that the children are not with Lori and Chad Daybell, and we also have information indicating that Lori knows either the location of the children or what has happened to them,” the release says. “Despite having this knowledge, she has refused to work with law enforcement to help us resolve this matter. It is astonishing that rather than work with law enforcement to help us locate her own children, Lori Vallow has chosen instead to leave the state with her new husband.”

Joshua Vallow, 7, and Tylee Ryan, 17, are being sought by police in Rexberg, Idaho.  (Rexburg Police Department)

Police said they  “strongly believe” the children's lives may be in danger.

Lori and Chad Daybell, 46 and 51 respectively, are believed to be part of a doomsday cult. Chad Daybell is a self-proclaimed Latter-day Saints author known for his books detailing the end of the world.

The couple is affiliated with Preparing with People, a group whose mission is to “help prepare the people of this earth for the second coming of Jesus Christ,” the news outlet reported.

Lori Daybell's former husband, Charles Vallow, was shot and killed in July by her brother in Arizona. Alex Cox wasn't charged and died a couple of weeks ago. His death is under investigation in Arizona, according to reports.

Rexburg police said its prime objective is finding the missing children. In a statement, the department addressed why charges haven't filed against the couple.

“Our primary concern at this point is simply locating Joshua and Tylee,” Rexburg Police wrote. “Charging decisions will be made in due course based upon the evidence available. If we find that harm was done to these children within our jurisdiction, we will prosecute whoever caused that harm.”

On Dec. 20, investigators said the children's disappearance could be related to the Oct. 19 death of Chad Daybell's former wife, Tammy. They have labeled the death "suspicious."

“We are aware that in the weeks after Tammy Daybell’s death, Lori Vallow/Daybell and Chad Daybell told witnesses that Lori’s daughter had died a year before the death of her father, which is untrue,” police said. “Around that same time Chad told another witness that Lori had no minor children.”

Investigators are imploring Lori Daybell to assist them.

"It is astonishing that rather than work with law enforcement to help us locate her own children, Lori Vallow has chosen to leave the state with her new husband," police said.