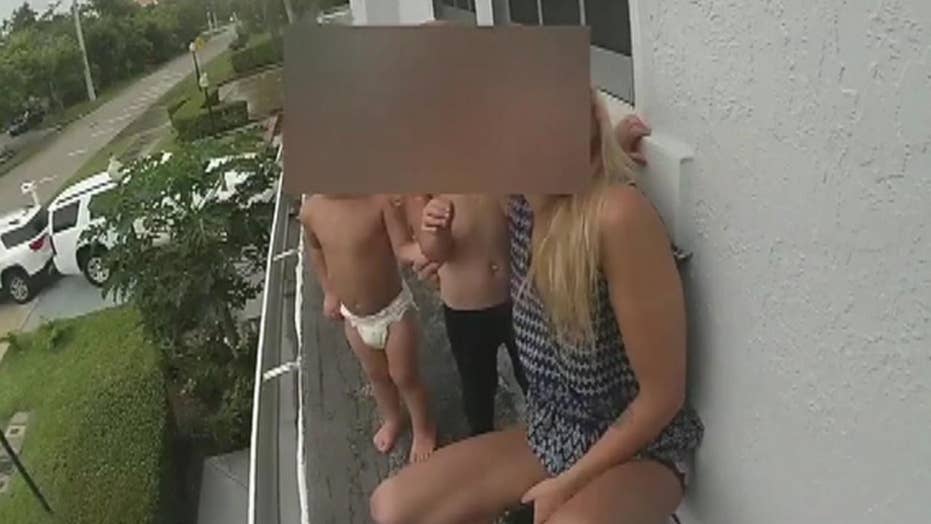 Police in South Florida have released video of officers rescuing a mother and two young children from a ledge above a townhouse garage last weekend.

The Delray Beach Police Department released the video on Facebook Wednesday. They said officers responded to multiple calls reporting a woman and two children — a 1-year-old boy and a 3-year-old girl — on a roof Saturday afternoon.

One of the first responding officers, identified as Rob Addea, positioned himself under the ledge “ready to catch a child or the woman if necessary,” the department said, adding that the ledge was “about 15-20 feet off the ground.”

“Just get the kids back inside,” Addea told the woman. “Please! Please! That’s all we want you to do.”

While Addea and another officer, Matt Warne, waited under the ledge — Sgt. Mike Debree and Sgt. Brian Griffith — went inside the house and made their way onto the ledge.

Debree took the arm of each child, while Griffith tried to reassure the woman that he was a police officer.

“I want to see your badge,” the woman said, according to WPLG. When Griffith displayed his badge, the woman said: “Are you a sergeant? No, it doesn’t say sergeant. ... Point blank, body avenger!”

Authorities said the woman was “acting erratically and refusing to listen to officers’ commands.” They added that she was “agitated and seemingly paranoid,” but would not elaborate on her condition.

Debree managed to walk the kids along the ledge, and handed them to officers waiting inside the townhouse. Griffith led the woman off the ledge moments later.

The woman, who has not been identified, was committed to a mental health facility and could face criminal charges. The Florida Department of Children and Families has taken charge of the children and has opened an investigation.