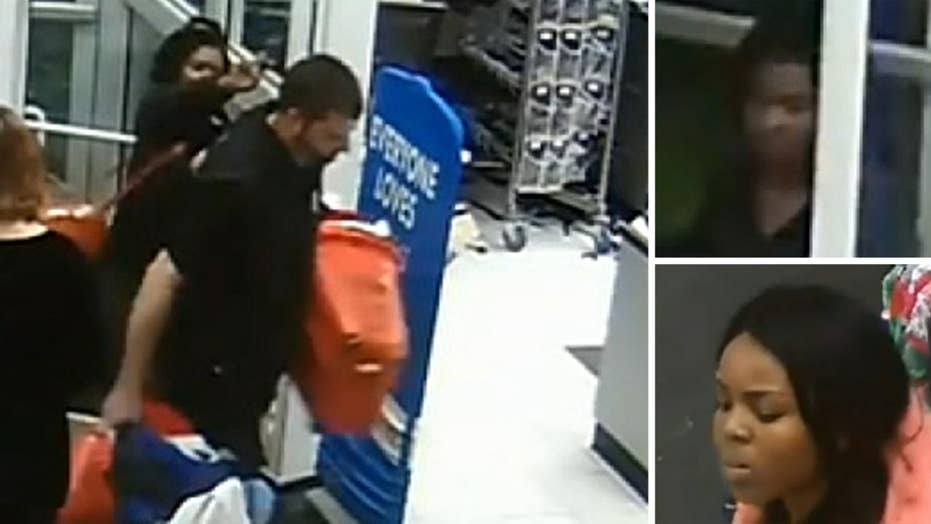 Raw video: Police search for suspects who sprayed an employee with a chemical irritant during robbery on Black Friday in Blaine, Minnesota.

Two women in Minnesota are wanted for aggravated burglary after they were caught on video surveillance macing a store employee while running off with baskets full of unpaid items on Black Friday.

Blaine Police released the images of two females, believed to be in their early 20s, who were caught stealing from the Burlington Coat Factory in the Northtown Mall at around 9 p.m. on the popular shopping day.

The suspect on the left was caught on surveillance tape macing a loss prevention officer while both women attempted to leave the Blaine store with baskets full of unpaid merchandise.  (Blaine Police Department )

The suspects can be seen attempting to leave the store with two red baskets full of items when a loss prevention officer runs over and grabs on to the carts. While he manages to take hold of the items, one of the suspects uses what police believe was mace on the officer.

The women leave the store empty-handed but returned seconds later to recover the merchandise they initially tried to make off with.

One bystander was knocked over during the altercation while another employee, who went over to tend to her, was taken to the hospital after being exposed to the mace, FOX9 reported.