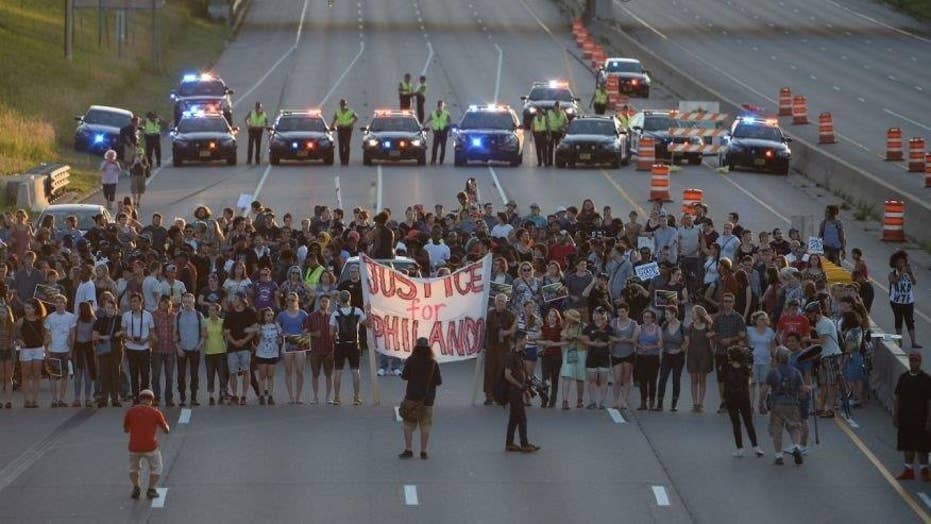 More than 100 people were arrested and 21 police officers injured in Minnesota Saturday night when protests over recent police killings of black men morphed into rioting.

St. Paul Mayor Chris Coleman detailed at a Sunday press conference what he called an “extreme incident” Saturday night that led to 102 arrests after protesters pelted police officers with rocks, rebar and incendiary devices, including Molotov cocktails. The injuries to officers were “significant, but none were life-threatening,” Coleman said.

The protests, which started with a march from the governor's mansion around 8 p.m., were among several demonstrations nationwide following the deaths of 32-year-old Philando Castile, a black man who was shot in a Minneapolis suburb by a police officer during a traffic stop, and 37-year-old Alton Sterling in Baton Rouge, La. Sterling, who was black, was shot after a scuffle with officers outside a convenience store.

The riots came just days after five Dallas police officers were murdered by Micah Johnson, who targeted white cops in a sniper attack last Thursday. Sterling's and Castile's families denounced the attack on the Dallas officers.

In Minnesota, police used smoke bombs to clear demonstrators blocking Interstate 94. About 200 protesters refused to leave the roadway just after midnight as police in riot gear began to move in on the crowd.

“We hope for the best and prepare for the worst and, unfortunately, last night the worst occurred,” St. Paul Police Chief Todd Axtell said at a Sunday press conference. Axtell passed around to reporters a police badge that was bent from the impact of a rock as he said he was “disgusted” by the acts of some people and added, “we’re not going to tolerate it.”

“It’s the first time in my 28 years as a police officer that I have observed this level of violence toward our public servants,” Axtell said. “We’re hoping and praying that tonight is a better night.”

Minnesota troopers tried to keep protesters from going on the freeway, but were unsuccessful, said Col. Matt Langer, chief of the Minnesota State Patrol. He said the previous protests were peaceful, and in the past marchers would listen to police, but that Saturday night’s protesters would not listen, and turned violent, throwing bottles, rocks and other debris at officers. More than 100 troopers responded to the freeway, working hand-in-hand with St. Paul police officers, Langer said.

The interstate reopened at about 1:30 a.m. Sunday, according to Fox 9.

Misty Macon, 20, of St. Paul, said the protest was mostly peaceful, even as at least one protester aimed a firework at an officer. She said she saw about 30 people being peacefully taken away by officers, who said they warned protesters they would be subject to arrest if they didn't disassemble.

"I guess I wasn't moving fast enough for him," said Mike Martin, referencing a police officer who he said pepper-sprayed him during the protests. Martin said he was trying to move the crowd along and keep the peace. "He just got it out and bam, I saw a cloud. It's burning pretty bad," said Martin.

Minnesota Gov. Mark Dayton met with family and friends of Castile on Saturday afternoon at the governor's mansion. An aide said the meeting was cordial, but declined to comment on the conversation.