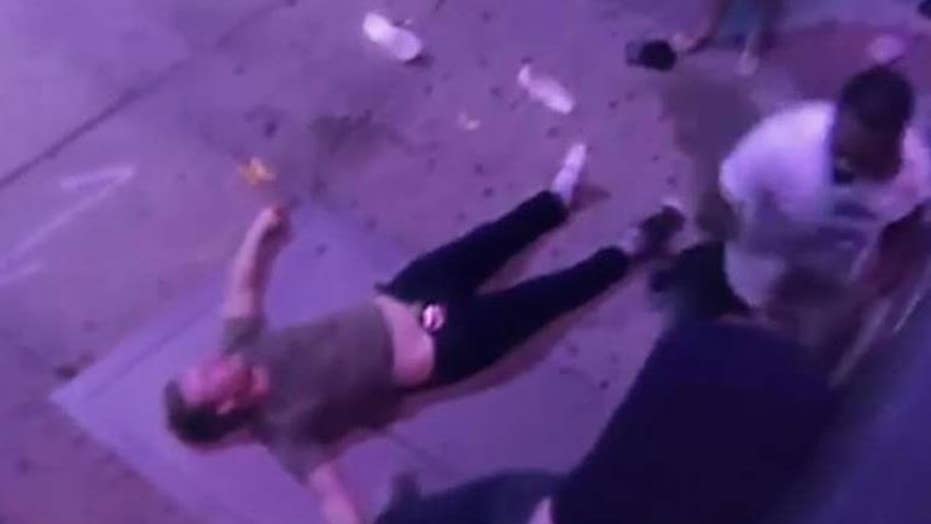 Minneapolis police report 20 people have been arrested, 18 of them charged, in connection with two brutal mob-style robberies caught on tape in viral videos.

The suspects range in age from 15 to 27 and were charged with various counts of robbery relating to two vicious robberies in August in which mobs surrounded young men and beat them unconscious. Some suspects were charged with first-degree felony robbery, which carries up to 20 years in prison.

Brendan O’Brien, 24, told Fox News he was out celebrating his birthday in Minneapolis when he was surrounded by one of the mobs and then beaten. The video appears to show O’Brien clinging to his belongings until he finally was knocked out.

“I didn't realize how hard I'd been kicked in the face. It was much more brutal than I thought it was going to be. I assumed that they hit me a couple of times and I gave up and they went on their way but I was knocked unconscious,” O’Brien told Fox News.

O’Brien says he suffered a concussion and injuries all over his body. He now has trouble with memory, sleeping and has a sense of fear.

“I don't feel as safe as I used to. I think that's the best way of putting it is that something like this kind of takes a part away from you and I don't know if I'm gonna’ get that back,” O’Brien said.

Police told Fox News a team of investigators worked for three weeks in partnership with the Hennepin County Sheriff’s Department to track down the assailants.

“There has to be consequences for your actions,” Arradondo told Fox News. “I don't want there to be a small group of people that feel that they can go unchallenged, unchecked.”

The videos appear to show groups of black men beating white males but Minneapolis police told Fox News the attacks do not qualify as hate crimes because the attackers didn’t target their victims for class or race. Rather, they were targeted because they were “impaired” or “compromised.”

The videos are emerging as Arradondo said his office is dealing with a crippling police shortage. He has requested a staggering 400 additional officers by 2025. But he said he has to convince an entire city council made up of some members that don’t want to add a single officer to the force.

“I’m going to continue to make the case and hopefully we'll continue to get the resources that we need to help support the men and women who are doing this job,” Arradondo told Fox News.

The public safety committee chair, Alondra Cano, told Fox News that some city council members are now asking for up to 30 additional officers. However, the final number won’t be decided until a budget is passed in December.

Cano said a beefed-up police department might have been able to prevent or quickly solve the violent robberies seen on video.

“It was really concerning to me to see those videos and that’s not what I want people to feel Minneapolis is like or about,” Cano said. “We probably could have been able to connect some of these robberies together at an earlier time if we had more support and officers for our investigations unit.”

Cano told Fox News the city is investing in and diversifying its force to better represent the community along with investing in juvenile crime prevention programs.