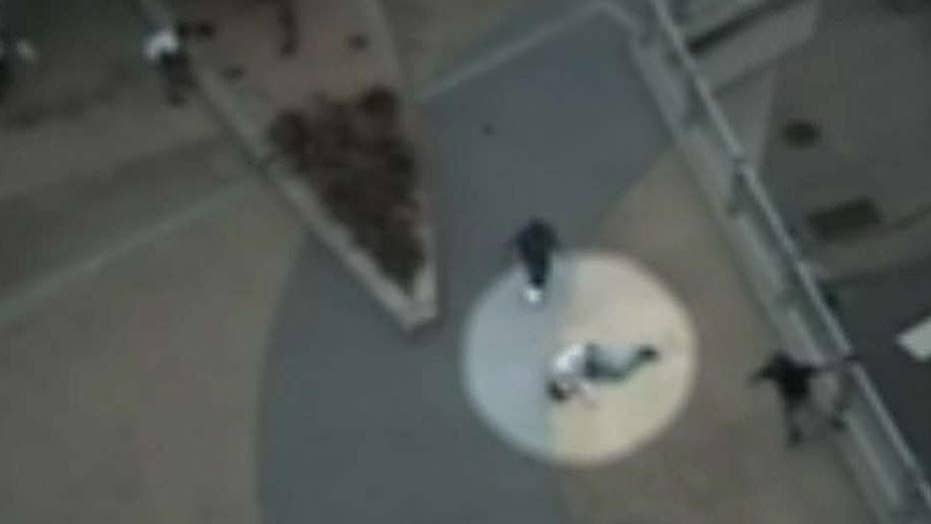 16 people are in custody facing assault and robbery charges after videos surface online of brutal attacks; Matt Finn has the latest.

Fox News has obtained a series of disturbing videos showing mob-style attacks in downtown Minneapolis in which police say “vulnerable” victims were targeted and brutally beaten for valuables such as cellphones.

Police told Fox News that an “incredible” law enforcement investigation led to the arrest of 16 people in connection to the videos. They face assault and robbery charges, among others.

In one daytime video, a mob can be seen pummeling a man just outside of the Minneapolis Twins’ stadium. At one point, the attackers run to gain speed and jump on the victim. They ride a bike over him, take off his pants and beat him with a belt. The victim appears to defend himself but is outnumbered and overpowered.

In another gruesome video, two young men appear to be attacked. They’re punched in the face and appear to fight back. One is knocked unconscious.

In a third video, a young man is surrounded by a mob and beaten unconscious. The video appears to show something being taken from his pocket once he’s on the ground.

All of these videos are emerging as the city of Minneapolis is dealing with a crippling shortage of police officers. The chief of police, Medaria Arradondo, has requested 400 additional officers over the next few years to make up for the shortage.

However, some members of Minneapolis’ City Council argue against the money going toward additional officers. Instead, they say the money should go toward other law enforcement and safety programs.

The city’s mayor, Jacob Frey, has proposed adding 14 additional officers to the force. Police told Fox News the mayor is supportive of the department and the new policing strategies in the city’s downtown.

The shortage of police is so staggering that over the past year the police department was unable to immediately send a squad car to 6,776 priority one emergencies. That includes situations like shots fired, stabbings and sexual assaults. A Minneapolis police website says priority one calls involve "an imminent threat to personal safety, or the loss or damage to property exists."

Even worse, police were unable to immediately respond to seven “priority zero” calls, including a baby not breathing and a fellow officer facing imminent danger. Priority zero calls, according to the Minneapolis police website, "include those situations where a known crisis exists that threatens the life of an individual. This is the highest possible priority and the fastest possible response is desired. The MECC objective is to have squads en route to the call within 30 seconds of receipt by the dispatcher."

“To have to look someone in the eye and tell them that we were unable to get there because we do not have enough resources – it’s unacceptable,” Andy Skoogman, the president of Minnesota Police Chiefs Association, told Fox News.

The chair of the city’s safety committee, Alondra Cano, previously told Fox News that the city council acknowledges there is a crisis and is investing and diversifying its force to better represent the community.

“I do appreciate that the mayor has put forward an investment strategy in our department because we can’t walk around with the same broken department since the 1950s,” Cano told Fox News. “We’re thankful that the information is out in the open. We would rather have a truthful conversation than pretend like this isn’t happening.”