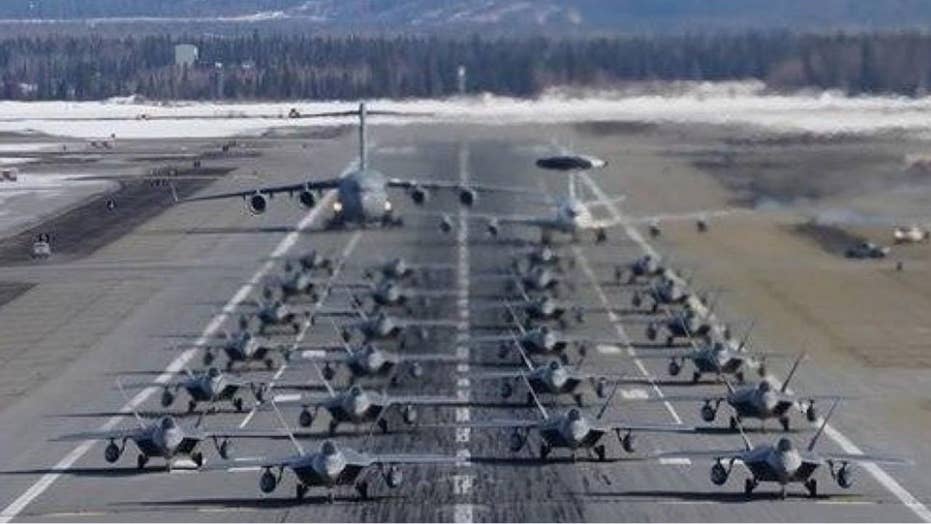 A squadron of USAF aircraft 'elephant walked' down an Alaskan military base on Tuesday as part of a routine to demonstrate their combat airpower and response abilities.

A squadron of USAF aircraft "elephant walked" down an Alaskan military base on Tuesday as part of a routine to demonstrate their combat airpower and response abilities.

A close formation taxi, known as an Elephant Walk, participating as part of Polar Force on Joint Base Elmendorf-Richardson in Alaska. (Facebook/3rd Wing @JBER3WG)

The “elephant walk,” which refers to the close formation of military aircraft before takeoff, comprised of 24 F-22 Raptor stealth fighters, a C-17 Globemaster III transport and an E-3 Sentry. Units usually perform an elephant walk to give pilots practice in teamwork and prepare for wartime operations,

Tuesday's demonstration took place at Joint Base Elmendorf-Richardson in Alaska, according to Stars and Stripes.

The routine was part of Polar Force, a two-week exercise that allows squadrons to showcase "their abilities to forward deploy and deliver overwhelming combat airpower," officials said.

Air Force officials posted photos of the close-formation taxi on Facebook. Video from the exercise shows the aircraft taking off one by one before returning to the airstrip.

The F-22 Raptors are from the 3rd Wing and 477th Fighter Group, which are both associated with Joint Base Elmendorf-Richardson.

Should a crisis arise in the Pacific region, the aircraft and airmen of the 3rd Wing would be among the first responders, according to The Drive.