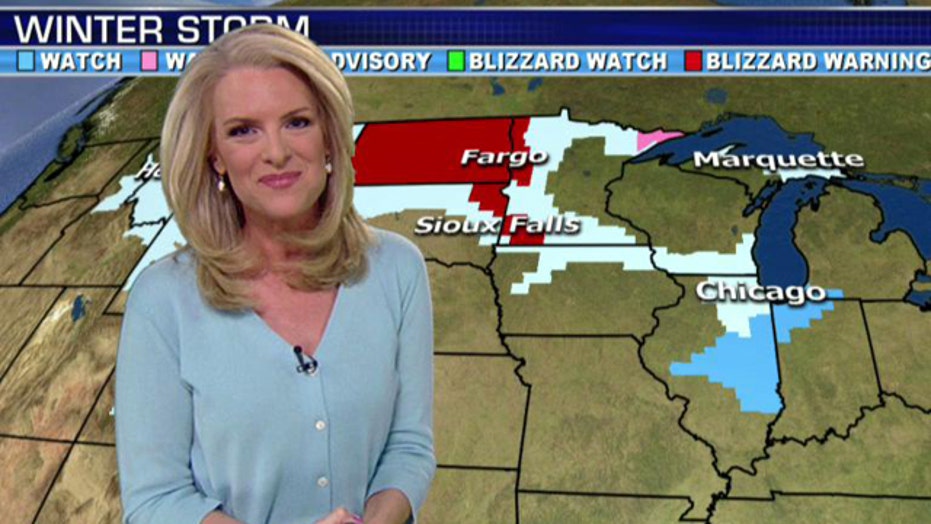 As much of the country digs out from a powerful winter storm that buried parts of the Northeast, forecasters are predicting an arctic-air blast over the northern tier of the country that will likely deliver the coldest air of the year.

The National Weather Service said the unusually cold air is expected to arrive by the weekend and will send wind chill temperatures in areas in North Dakota and Minnesota to minus 50 degrees by Saturday night.

"We usually don't call something 'life threatening.' But yes, we want people to know that this is very much a life-threatening event."

— Ken Simosko, a meteorologist from Bismarck

Those states are notorious for their cold winters, but states in the Mid-Atlantic and New England can also expect wind chill temperatures as low as minus 20 degrees.

The cold air will be the result of the polar vortex dropping from Central Canada, NOAA reported. To put the drastic temperature in perspective, Ken Simosko, a meteorologist from Bismarck, said it would take all of five minutes to get frostbite in minus 50 degree condition.

"We usually don't call something 'life threatening,'" he told FoxNews.com. "But yes, we want people to know that this is very much a life-threatening event."

Simosko urged people in the region to stay indoors when the temperature sinks. He said it is a rare event to see ground temperatures around the minus 25 degree mark combined wind gusts up to 30 miles an hour.

Besides the cold air, meteorologists are also eyeing another snowstorm that might form over the Midwest this weekend and potentially dump 6 to 12 inches of snow. The storm is expected to turn to rain as it makes its way east.

Meanwhile, some cities have already seen record lows on Friday. In Wisconsin, a record low temperature was set in Green Bay, where the mercury dipped to minus 18. The National Weather Service said that topped the 17-below-zero mark last recorded in 1979.

Sunday's playoff game in Green Bay could be among one of the coldest NFL games ever played. Temperatures at Lambeau Field are expected to be a frigid minus 2 degrees when the Packers and San Francisco 49ers kick off, and by the fourth quarter it'll be a bone-chilling minus 7, with wind chills approaching minus 30, according to the National Weather Service. Officials are warning fans to take extra safety measures to stay warm including dressing in layers and sipping warm drinks.

It was so cold in a place that bills itself as Snowtown USA that some events at the town's winter festival were canceled. Organizers of this week's Snowtown festival in Watertown in northern New York scratched a snowshoe tour, horse-drawn carriage rides, dog sled rides and a snow softball tournament as temperatures plunged below zero across the North Country. Organizers moved other outdoor activities to indoor facilities.

Forecasters warned that gusts of up to 30 miles per hour could bring wind chills to minus 25 degrees, cold enough to cause frostbite in about 30 minutes or less, with some of the coldest temperatures expected Friday night. The weather service said people should dress warmly to avoid hypothermia and cover all exposed skin.

Warming centers opened around the region, homeless shelters saw larger crowds and cities took special measures to look after those most vulnerable to the cold. Outreach teams were searching New York City streets for homeless people at risk of freezing to death.

In Hallowell, Maine, where temperatures dipped to minus 8 degrees Friday morning, David Wheelock used a shovel to search the snow where he dropped his keys outside his son's copy and printing shop.

The 73-year-old lifelong Maine resident said he's seen his fair share of bad winters and wasn't too fazed by the snow and bitter cold. But he said it can be dangerous if people aren't prepared for the worst, with things like back-up heat sources at home, and jumper cables and extra clothes in the car.

"I don't always rely on someone else to come bail me out," he said.

And though this cold spell will last just a few days as warmer air comes behind, it likely will freeze over the Great Lakes and other bodies of water, meaning frigid temperatures will likely last the rest of winter, said Ryan Maue, a meteorologist for Weather Bell.

"It raises the chances for future cold," he said, adding it could include next month's Super Bowl in New York.