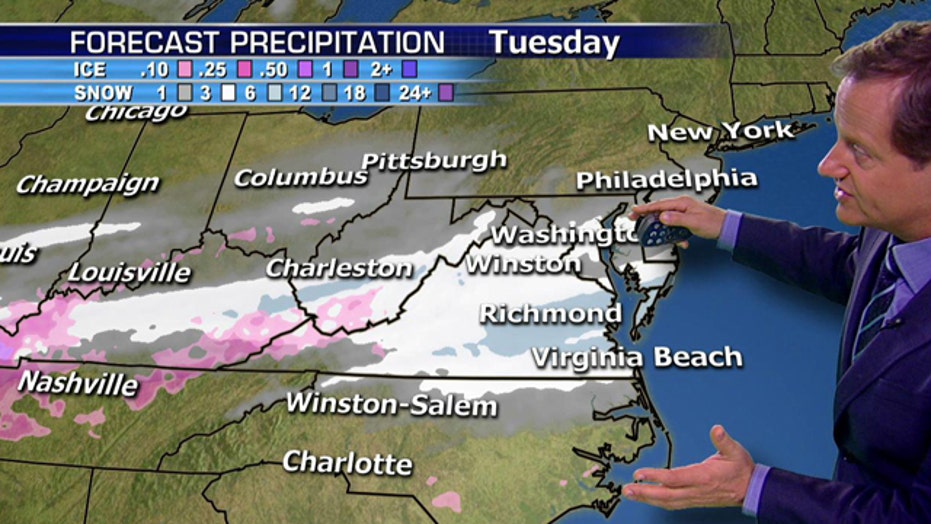 Up to foot of snow is expected to fall in parts of the mid-Atlantic Monday as a massive mid-winter storm canceled flights and gave a snow day to schoolchildren and federal workers alike.

Snow began falling in the nation's capital early Monday, and officials warned people to stay off treacherous, icy roads — a refrain that has become familiar to residents in the Midwest, East and even Deep South this year.

The latest frigid blow of the harsh winter threatened as much as 10 inches of snow by the end of the day in Washington, Baltimore and elsewhere in the Mid-Atlantic region. Up to 6 inches of snow was predicted to the north in Philadelphia, while nearly a foot of snow was expected in parts of New Jersey.

"We're tired of it. We're sick of it," said Martin Peace, a web developer from the Washington suburb of Arlington, Va.

He and his wife were walking on the National Mall with their young daughter Sunday before the frigid weather blew in. Both bemoaned the number of snowy days this year.

"It's been hard with a baby being stuck in the house," said Nicole Peace, who works in human resources. "We don't really get the day off, but then we have to work from home with the baby, which is hard."

The forecasts were enough to shut much of Washington down. On Sunday night, the federal government announced that its Washington-area offices would be closed Monday. The U.S. Office of Personnel Management, which sets leave policies for 300,000 federal workers in the region, says non-emergency personnel are granted excused absences for the day.

School systems in Baltimore, Washington and many suburban areas were closed, as were all Smithsonian museums except for the National Air and Space Museum. However, the U.S. Supreme Court was expected to be open and had arguments scheduled for Monday.

The wintry precipitation moved across much of the nation Sunday, bringing a mix of freezing rain and heavy snow to central and eastern states. Authorities warned of possible power outages and flight disruptions from weather that could affect millions.

In central Kentucky on Monday morning, vehicles moved slowly and quietly on roads that were mostly snow covered and slushy despite plows going through. The lines separating lanes were mostly invisible under the snow and ice, and at least a few cars had slid off the roadways.

In Ohio, crews in Cincinnati were treating roads as a mix of freezing rain and snow fell late Sunday.

A suspension bridge over the Ohio River between Cincinnati and Kentucky was closed Sunday because of ice covering its hard-to-treat metal grid deck.

Freezing rain and sleet moved across Kentucky, making road travel treacherous Sunday. Officials warned residents to avoid unnecessary travel. Parts of the state could receive up to 8 inches of sleet and snow through Monday. Churches throughout the state canceled services.

Parts of West Virginia could also get up to a foot of snow. That sent residents on a hunt for food, water and supplies.

Linda McGilton of Charleston said she tries to be prepared but she also was not concerned.

"I don't try to panic. It doesn't do any good," McGilton of Charleston said as she unloaded a grocery cart outside the Kroger store.

Richmond, Va., was expected to get as many as 7 inches of snow Monday. Katilynn Allan, 22, bemoaned the city's unpredictable weather but said she was not too worried about driving if she had to make the short commute to her job as a financial planner.

"It's not too bad," said Allan. "You just have to take it slow when there is ice on the road.”