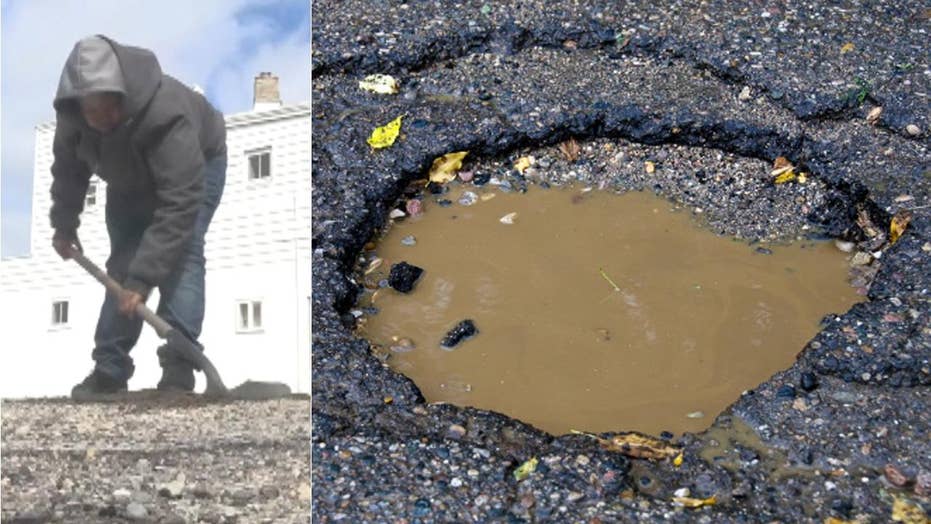 Michigan boy, 12, fills potholes himself to help his neighbors

Monte Scott, 12, has been filling potholes up and down his street, armed with a shovel and a giant garbage bin full of dirt to help his neighborhood street recover from a bad winter that's ruined roads.

A 12-year-old boy in Michigan has decided he's not going to wait for officials to fill the large potholes dotting a street near his home and is instead getting his hands dirty and filling the craters himself.

Monte Scott starting filling potholes last week using a shovel and dirt from his backyard in Muskegon Heights after he grew fed up with the state of neighborhood roads.

“I didn't want people messing up their cars like my mom did,” he told WZZM-TV. “If somebody were to drive down the street and hit a pothole, and then would have to pay like $600-700 to get their car fixed, they would be mad."

SCIENTISTS HOPE BACTERIA COULD BE THE CURE FOR POTHOLES

The 12-year-old didn't tell anyone of his plans. His mother, Trinell Scott, told the television station she only found out after she got a text message from her niece saying she saw Michael in a video posted to Facebook filling in the holes.

In the video, Monte can be seen filling in a pothole on the road that's larger than the base of his trash can.

“He just took it upon himself to [fix the road],” Trinell Scott told WZZM. “That’s just the type of kid he is. When he sees there’s a problem or a need, and he thinks he can fix it, he’ll try to fix it.”

The video has been viewed more than 62,000 times since it was posted on Wednesday.

SECRET UNDERGROUND TUNNEL DISCOVERED IN FLORIDA UNDER INVESTIGATION BY FBI

Since starting out last week, the 12-year-old has filled 15 potholes around his family's home. His mother said it just shows that her son is a good kid, one of many in the community.

“Everything is not bad out of Muskegon Heights," she told WZZM.

County and city officials have not yet commented on the 12-year-old's endeavor, but the issue of crumbling roads across Michigan is something that's struck a chord with residents.

Democratic Gov. Gretchen Whitmer, who campaigned in 2018 on a bold promise to "fix the damn roads" has proposed to nearly triple the state's per-gallon gasoline tax to make it the highest in the nation. Her plan is pending legislative approval, according to FOX2.