Disgraced attorney Michael Avenatti walked out of a New York City federal jail Friday morning after a judge ordered his temporary release due to coronavirus fears.

The onetime agitator of President Trump left the Metropolitan Correctional Center in Manhattan at around 11 a.m., his attorney Dean Steward said. Avenatti is required to return to the facility in 90 days.

Avenatti has been in quarantine for the past 14 days at the facility to make sure he doesn't have signs of the novel coronavirus that has infected 2.7 million people worldwide.

US STARTS TO RELEASE INMATES DUE TO CORONAVIRUS OUTBREAK

He is part of a growing group of non-violent high-profile offenders who have been released early from prison due to concerns about the highly contagious, fast-spreading virus.

In court filings, Steward argued that Avenatti had pneumonia six months ago and was at risk of contracting COVID-19.

"We're really gratified that the judge took the action that he did," Avenatti's lawyer told Fox News. "He recognized the seriousness of the situation."

Senior U.S. District Judge James Selna ruled earlier this month that Avenatti should be escorted on a flight to Southern California and will spend the next three months at his friend's house in Venice. He will be required to wear a monitoring bracelet and is prohibited from using the internet. He will be able to see his wife.

Avenatti has been awaiting sentencing for trying to extort $25 million from athletic apparel giant Nike. 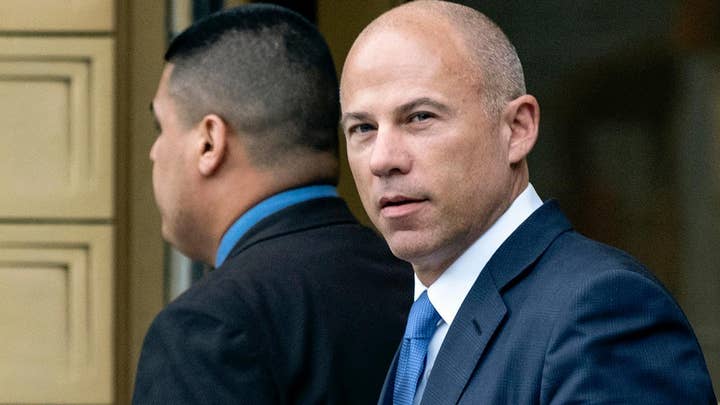 He was convicted in February by federal jury in Manhattan on three counts of extortion, wire fraud and transmission of interstate communications with intent to extort and faces up to 42 years in prison.

Avenatti has also been charged in Manhattan Federal Court with swindling Daniels out of nearly $300,000 from a book deal. He's also accused in Los Angeles of cheating clients, lying in bankruptcy proceedings and failing to pay taxes.

Avenatti gained prominence by making frequent cable television appearances in 2018 and 2019 as journalists courted him for information about Daniels, who sued Trump to void a nondisclosure agreement in which she was paid $130,000 by Trump's then-attorney Michael Cohen to keep quiet about an alleged sexual encounter with the future president in 2006. Trump has denied any such encounter took place.

Avenatti announced in March 2019 that he had cut ties with Daniels "for various reasons that we cannot disclose publicly due to the attorney-client privilege."

At the peak of his notoriety, Avenatti even considered running for president.

However, his fall from grace came when he was arrested last year as he was about to meet Nike lawyers to press his demands for millions to conduct an internal probe of the Beaverton, Ore.-based shoemaker.

Avenatti maintained he was taking the aggressive position at the urging of his client, Gary Franklin, who ran a youth basketball league in Los Angeles and was angry that Nike ended a decade-long sponsorship that provided $72,000 annually and free gear. The lawyer sought $1.5 million for Franklin, as well.

COLIN KAEPERNICK'S NIKE COMMERCIAL IS NOMINATED FOR AN EMMY AWARD

Franklin testified that two Nike executives forced him to pay money to the mother of an elite high school basketball player's mother and to pass along payments to the handlers of other players while doctoring paperwork to hide the purpose of the funds.

When the guilty verdict was read, Avenatti was seen in court blessing himself. He looked straight ahead with a sad expression.

Avenatti's defense lawyer told reporters he will appeal on the basis of jury instructions and said Avenatti was "very disappointed" with the verdict.