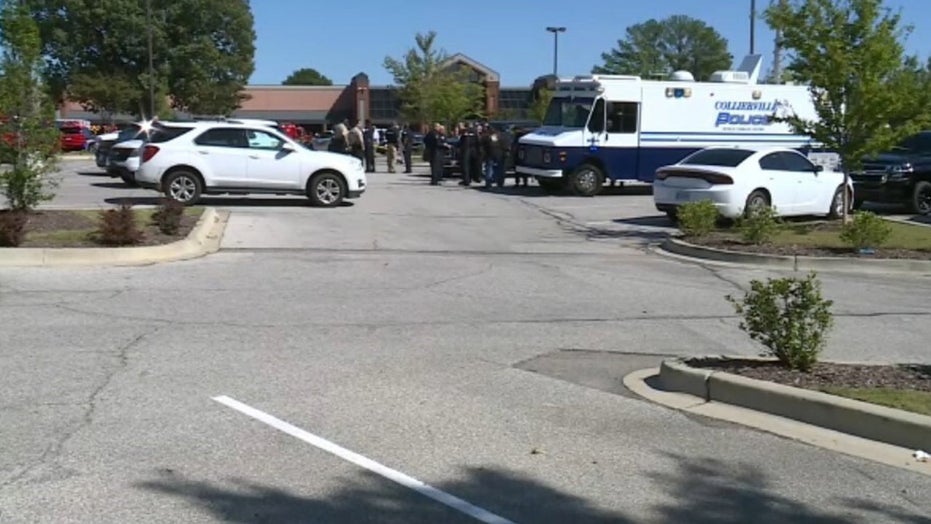 Police in Tennessee responded Thursday after at least a dozen people were shot at a Kroger supermarket, including at least one who was killed.

The shooter, whose identity remained unknown, also was dead of what was believed to be a self-inflicted gunshot wound, police said.

The shooting happened in Collierville, Tennessee, about 30 miles east of downtown Memphis.

The parking lot of Kroger.  (WREG)

Collierville police Chief Dale Lane said responding officers and a SWAT team entered the supermarket and went aisle to aisle to rescue employees – some of whom were hiding in the store's freezer.

"I've been involved in this for 34 years and I've never seen a scene like this," Lane said, calling it "the most horrific event in Collierville history."

Police said 44 employees were in the store at the time of the shooting, though it was unclear how many customers were inside. Lane said an image circulating on social media, showing someone on the store's roof, was later determined to be that of a Kroger employee.

The Collierville Police Department originally received a call regarding an active shooter at Kroger at around 1:30 p.m., authorities said. Kroger employee Brignetta Dickerson said she was working the cash register Thursday when shots rang out.

The victim killed in the shooting was identified by her family as Olivia King, according to FOX 13 Memphis.

"Our family is devastated by this senseless act of violence. We ask that you pray for the repose of the soul of our mother, Olivia King," a statement by the family read. "We also ask everyone for their prayers for all families and friends affected by the events today, as well as for God’s mercy on the shooter and his family. Thank you."

Emergency medical personnel from the Collierville Fire Department arrived to assist with providing medical aid. The injured victims were transferred to area hospitals.

At least one victim was in surgery and another was in the ICU, Lane said. Another person arrived at a hospital with an anxiety attack, he added.

"We are deeply saddened by the incident that occurred at our Kroger store," the company said in a statement. "The entire Kroger family offers our thoughts, prayers, and support to the individuals and families of the victims during this difficult time."

The company said it has initiated counseling services for its employees. The store will remain closed during the police investigation.

Collierville High School was put on lockdown amid the shooting but that precaution was later lifted.

The aftermath of the shooting.  (WREG)

"The victims were able to get medical treatment much faster because of the integration between police and fire," he said. "It’s one thing to see it on the news, but it’s another thing when you’re having to go in and know that there a potential person armed on the other side."

"And there was not one person that didn’t [go in]," Lane added. "That building was flooded with blue uniforms and I’m very thankful for that."

A responder walks down an aisle in a Kroger grocery store as the investigation goes into the night following a shooting earlier in the day on Thursday, Sept. 23, 2021, in Collierville, Tenn. (AP Photo/Mark Humphrey)

Multiple law enforcement agencies were on scene, including the Shelby County Sheriff's Office and the Memphis Police Department, who helped secure the perimeter. Also assisting with the investigation were personnel from the FBI and from the Bureau of Alcohol, Tobacco, Firearms, and Explosives (ATF).

Photos from Nashville's NewsChannel 5 showed police investigating the suspected shooter's car to make sure it was cleared of any possible booby traps. A bomb robot removed a box from inside the car, according to the station.

Collierville police said the scene was now secure and search warrants will be carried out. Lane declined to reveal more about the suspect Thursday night, citing the ongoing investigation.

"It's going to take a little bit before we know what happened," Lane said.

The department originally received a call regarding an active shooter at Kroger at around 1:30 p.m.

"We are monitoring the tragic situation in Collierville and offer full support to @TBInvestigation, @TNDeptofSafety, and local law enforcement as they investigate further," he wrote.

On Friday, students at Collierville High School are asked to wear maroon "as a sign of solidarity with Dragon Nation and the entire Town of Collierville," FOX 13 reported.