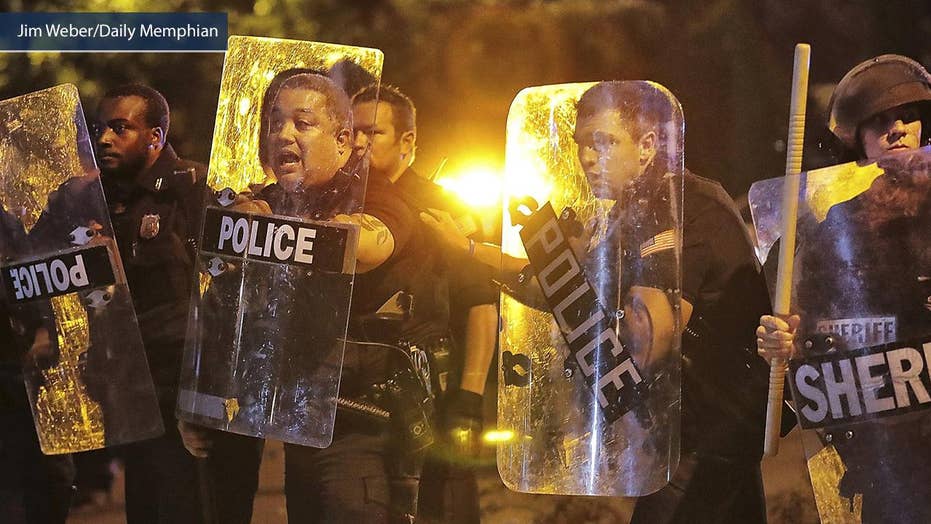 The fatal shooting of a suspect who allegedly emerged from his vehicle with a weapon after ramming the vehicles of approaching law enforcement officers sparked a clash between Memphis, Tenn., residents and police on Wednesday night, according to reports.

The suspect was not named by authorities but was identified by two local politicians and on numerous social media posts as Brandon Webber, 20. The Tennessee Bureau of Investigation said early Thursday that the suspect killed by the U.S. Marshals Service had been wanted on numerous warrants.

In the violence that followed, at least two dozen law enforcement officers and at least two journalists were injured, Memphis Mayor Jim Strickland wrote on Facebook.

In addition, Strickland added, "Multiple police cars were vandalized. A concrete wall outside a business was torn down. The windows were broken out at fire station 31."

One video posted online showed a man smashing a chair against a police vehicle.

Police retreat under a cloud of tear gas as protesters disperse from the scene of a standoff after Frayser community residents took to the streets in anger against the shooting of a youth by U.S. Marshals earlier in the evening, Wednesday, June 12, 2019, in Memphis, Tenn. (Associated Press)

Police reported that they had received a call for assistance from the U.S. Marshals Service earlier in the evening.

The Commercial Appeal of Memphis reported that a “tense standoff” developed between law enforcement and residents after the shooting, which took place in the Frayser neighborhood.

Frayser community residents taunt authorities as protesters take to the streets in anger against the shooting of a youth identified by family members as Brandon Webber by U.S. Marshals earlier in the evening, Wednesday, June 12, 2019, in Memphis, Tenn. (Associated Press)

As the crowd grew restless, several gunshots were heard and police officers were seen with shields and batons.

The NAACP tweeted that the organization was monitoring events in the city.

The crowd began to disperse around 10 p.m., the Commercial Appeal reported.