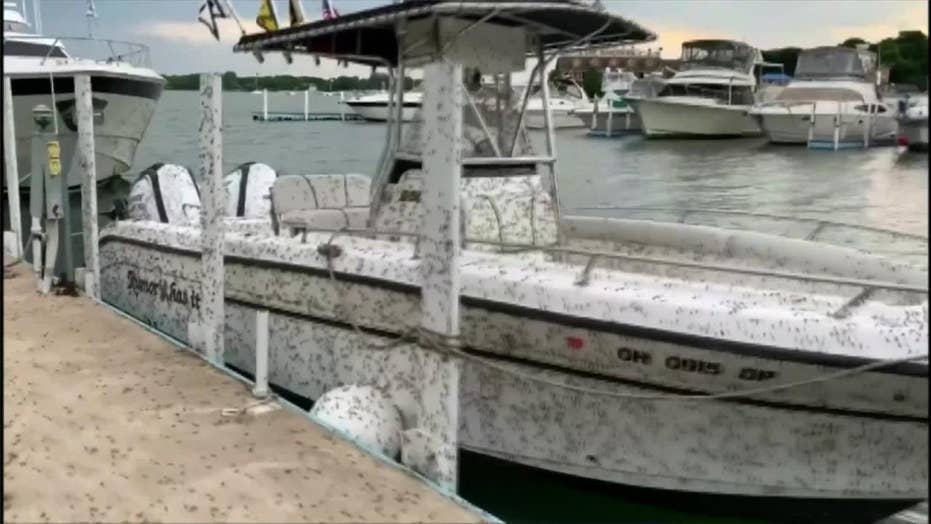 Ohio man films thousands of mayflies on his yacht

An Ohio man filmed thousands of mayflies that covered his yacht.

Residents in parts of Northern Ohio are battling a massive swarm of mayflies as thousands of the tiny insects blanketed the state this week.

People living Catawba have taken to social media to share shocking pictures of cars and storefronts covered in the insects which have flocked to the Lake Erie area.

"Think the mayflies are bad in Catawba!” one person wrote on Facebook after sharing a picture of a car completely covered in a swarm, Fox 8 reported.

GIANT AFRICAN SNAILS, ONCE ERADICATED FROM US, CONFISCATED FROM SUITCASE AT GEORGIA AIRPORT

Another image showed the entrance to a building completely covered by the tiny critters.

The swarm is so large this year that it was picked up by local weather radars on Thursday.

While the images themselves are alarming, mayflies are harmless and are in fact an indication that the lake is extremely clean.

According to Ohio State University, the Environmental Protection Agency in Ohio partly determines the cleanliness of Lake Erie and other Great Lakes based on the insect population. Mayflies breed in clean water only as the larvae live in lake sediments until they hatch in the swarms that many residents are now observing.