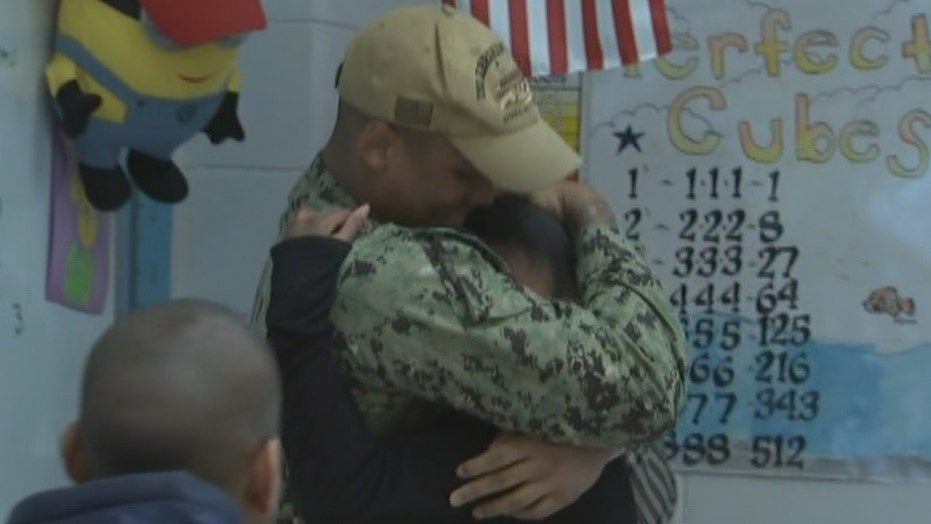 Sailor surprises sister at school after returning home from deployment

Sailor surprises sister at school after returning home from deployment.

A Maryland sailor gave his younger siblings a Valentine’s Day to remember.

LeBaron Bass had been stationed on the USS Abraham Lincoln for an 11-month deployment overseas – the longest he’s been away from his younger siblings.

Bass, who was deployed in the Middle East, first surprised his sister, 12-year-old Sasha, who was completely shocked to see her older brother in her classroom at Davis Middle School, Fox 5 DC reported.

“You just gonna sit there?” Bass can be heard in a video of the encounter asking his surprised sister, before giving her a big hug. “I got you. Did I get you?”

He then surprised his younger brother, 11-year-old Rahsaan.

A new police officer in Irving, Texas, got a big surprise when her military son appeared at her swearing-in ceremony, after he'd been stationed overseas for two years.

“After 11 months, missing her birthday, missing almost every type of holiday there is, just to see her reaction – it was the best feeling I can image,” Bass told Fox 5 DC.

Sasha and Rahsaan said they never saw it coming.

“I was just surprised (that he’s back),” she said.

Their mother, Mary Sanders, told Fox 5 DC she and Bass had been planning the surprise for more than two months. It went off without a hitch.

“It’s an amazing feeling,” she said.

Bass is set to deploy again next month.