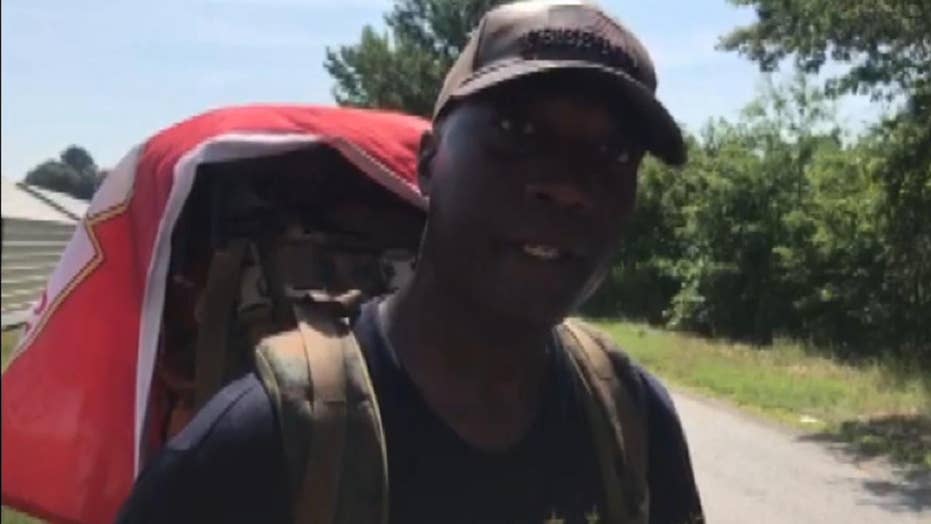 Veteran walking across the US to raise PTSD awareness

Marine Corps veteran Roy Wesley Brady, Jr. on a mission to honor his brother and help veterans with mental illness.

A Marine veteran is making his second trek across the United States in an effort to raise awareness for other vets suffering from post-traumatic stress disorder and other mental health issues.

Ron Wesley Brady Jr., a retired gunnery sergeant with the Marine Corps, is currently making his way through Arkansas in the fourth month of his journey walking across the country. He is doing it all in the name of his brother, Major Brady, who committed suicide after suffering from mental health issues.

“My goal is to raise awareness for PTSD, traumatic brain injury, and the suicide rate," he told FOX5 Atlanta. "We're dealing with 22 a day, alright? We need to get out and talk to each other. Veterans, we need to talk to veterans. We understand each other.”

The 22-year veteran, who was twice deployed to Iraq, set out on March 5 from San Diego on route to Quantico, Virginia – where his brother is buried. He will continue on to Trenton, N.J., where his friend and fellow Marine, Tommy Simpson, committed suicide.

On the Combat Wounded Veteran Challenge website, Brady said he is doing the walk “because it needs to be done.”

“I’m walking to spread awareness of these issues to whoever will listen to me.  If you saw me walking down the road, with my rucksack and Marine Corps flag waving behind me…and looked me up, then my plan worked. You are here learning about difficulties that wounded service members face,” he said.

Brady told THV11 he wants veterans and civilians alike to start the conversation.

“They have a family member somewhere, where they can say, ‘Hey, let’s talk about your problems.’ We’re stubborn as military people. I’m very stubborn,” he said. “But sometimes you’ve got to sit down with somebody that understands you and put your problems on the table. Because taking your life is not the way out. Life is so much better.”

This is not the first time Brady has walked across the country.

In 2015, the veteran left Charlotte, N.C., on foot walking for nearly six months and more than 3,000 miles to Camp Pendleton in Oceanside, Calif.

Brady is expected to reach New Jersey sometime in September. To follow his journey, visit his Facebook page.