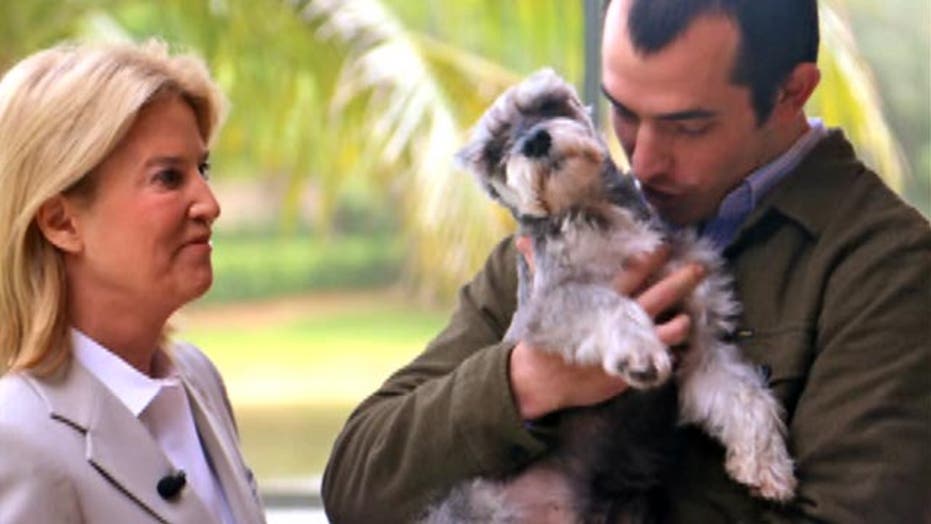 Greta: A sneak peek of our interview with Tahmooressi

'Off the Record,' 11/5/14: You will see our Marine finally out of a Mexican prison and hear what he has to say in 'Freed Marine: Sgt. Tahmooressi's Story,' our 1-hour 'On the Record' special. #MarineFreed

After 214 days in a Mexican prison, Sgt. Andrew Tahmooressi returned home to Florida Saturday, having been freed Friday night after a strong diplomatic push appeared to help convince a judge to release the former Marine on humanitarian grounds.

After reviewing the ruling, Tahmooressi family spokesman Jonathan Franks said the judge acted on a recommendation from the PGR, the Mexican Attorney General's Office. In that motion, the prosecutor "essentially withdrew the charges," Franks said. Moments later, the trial judge issued an acquittal in Andrew's case, calling for an "immediate and absolute release."

Franks said the private plane carrying Marine Sgt. Andrew Tahmooressi, his mother and supporters -- including former New Mexico Gov. Bill Richardson -- landed at a South Florida airport about 6 a.m. Tahmooressi was freed Friday night and reunited with his mother, Jill, and then boarded the flight to Florida in San Diego.

His release comes after a lengthy, closed trial and a Congressional hearing in September highly critical of Obama Administration efforts to secure his release and Mexico’s refusal to let him go.  Tahmooressi said he made an innocent mistake the evening he crossed into Tijuana with three weapons in his truck on March 31.

While his defense rested its case several weeks ago, Tahmooressi’s release came only after a strong diplomatic push from former Gov. Bill Richardson of New Mexico and Reps. Ed Royce (R-CA) and Matt Salmon (R-AZ). Speaking by phone on his way to board a plane with Tahmooressi, Richardson said the trio, along with talk show host Montel Williams, met with Mexico’s Attorney General and Ambassador to the US, advocating for his liberation.

"The totality of diplomacy, the judicial process, the legal strategy and the importance of the American-Mexican relationship resulted in Andrew's release," Richardson said. "And now we have this great outcome.  Andrew's coming home."

As late as Friday morning, the family spokesman told Fox News the judge was not expected to make a decision for at least another week.  While the spokesman expressed optimism, the there was no certainty that the judge would rule in Tahmooressi’s favor and could have found him guilty of firearms possession.  His attorney had argued for his release based on humanitarian grounds and on a violation of his civil rights.

"He was happy.  He was smiling.  He's looking good.  His spirits are high," Richardson told Fox News, adding that Tahmooressi said he wants a steak dinner and stone crabs.

But Richardson said Tahmooressi is seeking privacy and still needs to receive treatment for his Post-Traumatic Stress Disorder, something that wasn’t available in Mexican prison-- a key argument put forth by defense attorney Fernando Benitez.

The three officials, along with Tahmooressi’s mother Jill, have spent the last week in Tijuana pressing officials for his release.

Speaking by phone on his way to board a plane with Tahmooressi, Richardson said the trio, along with talk show host Montel Williams, met with Mexico’s Attorney General and Ambassador to the US, advocating for his liberation.

FoxNews.com covered Tahmooressi's seven-month ordeal extensively, with numerous reports from the Tijuana court where hearings were held, interviews with the jailed Marine by telephone and several guest opinion columns by military, medical and legal experts critical of his treatment in Mexico.

Fox News Channel's Greta Van Susteran also covered the case extensively, even driving the poorly-marked and confusing route Tahmooressi took the night he was detained and going to the prison where he was held. But other national media outlets largely ignored the plight of Tahmooressi, and the White House was heavily criticized for not doing more to secure his release despite the fact that Tahmooressi  served two tours of duty in Afghanistan and suffered from Post-Traumatic Stress Disorder.

Benitez said that Tahmooressi's condition was continuing to deteriorate and Mexico didn’t have the expertise or facilities to treat his PTSD, which he suffered after two tours in Afghanistan.

But after the seven-month ordeal, it was the PTSD argument that ultimately pressured the judge to acquit Tahmooressi.

“The judicial process of Mexico made the right choice,” Richardson said. “The humanitarian release was justified based on PTSD, something that the Mexican judicial and medical system is not as conscious of as the United States.”