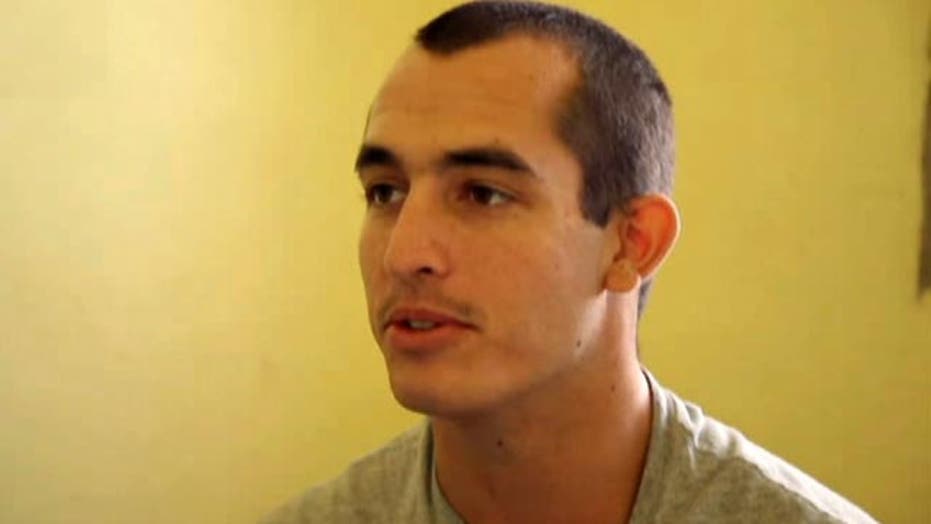 Exclusive: Sgt. Andrew Tahmooressi recalls his desperate attempt to escape a Mexican jail and how he earned comparisons to a wall-crawling superhero. #MarineHeldinMexico

The U.S. Marine jailed in a Mexican prison on gun charges told Fox News’ Greta Van Susteren Friday new details about his harrowing attempt to escape from jail, a move he says he attempted because he feared for his life.

Sgt. Andrew Tahmooressi has been imprisoned in Mexico after he accidentally crossed the border March 31 with three guns in his truck.

Tahmooressi told Van Susteren on "On the Record" he tried to flee by scaling a nearby cage that was about nine feet tall. He said he pulled himself up to the top of the cage and ran across the cage onto a nearby rooftop.

He said he was able to go from the roof to a fence, and scaled many other rooftops and fences until he reached a front gate of the prison. He said he saw no way out, so attempted to shimmy across a pipe to reach another roof.

Then, he said, a Mexican official with a shotgun in a tower behind him began shooting at him. He said he saw the bullet’s impact only about four feet above his head.

“That’s when I got on the ground with my belly to the ground and my hands behind my head and I gave up,” he said.

Tahmooressi also discussed his life in the Marines, saying he joined the military because he wanted to grow as a man and be “part of the fight.”

“I always wanted to serve my country and be part of a brotherhood like the Marine Corps,” he said.

Tahmooressi also told Van Susteren about an IED attack he suffered while serving in Afghanistan, and said he has had PTSD since serving in combat. He said he relies on prayer to get him through it.