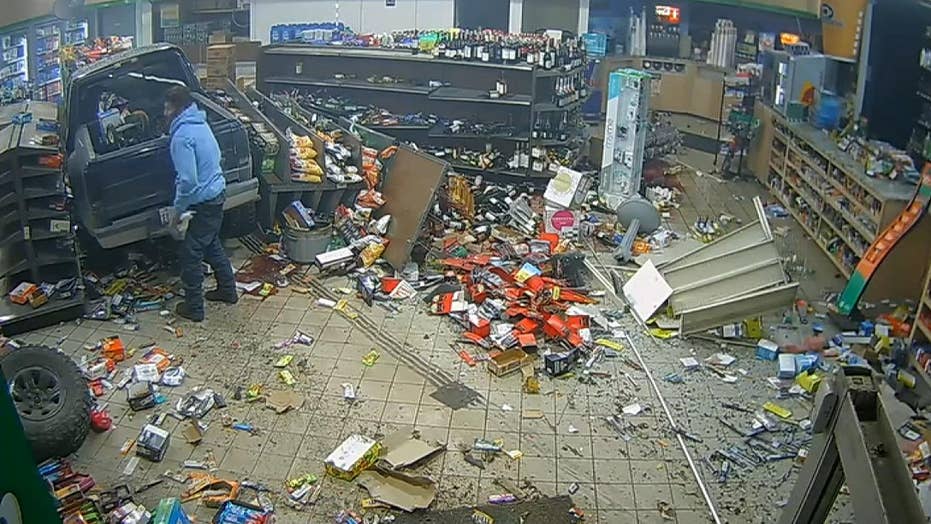 Raw video: Surveillance footage shows a truck crashing into a store, causing damage to the front doors and the interior.

A man who attempted to spin his brand new tires lost control and crashed into a Michigan gas station before fleeing the scene on Thursday, police say.

Video shows William Edmonds, 24, accelerating in the parking lot of an Ortonville BP gas station around 2:30 a.m. before his truck hits the gas pump island and crashes into the convenience store attached to the station. He told police he wanted to spin his wheels around 180 degrees, according to ABC 12.

Glass, plastic shelving, wine bottles, and countless food items litter the ground of the station following his out of control test drive.

Video shows William Edmonds, 24, accelerating his pickup truck in the parking lot of a BP gas station around 2:30 a.m. before his truck hit the gas pump island and crashed violently into the convenience store attached to the station. (Oakland County Sheriff's Office)

The dazed man, whose truck stopped in the middle of the store, can then be seen attempting to detach his license plate and falling down on the debris-littered floor as he rips it from his truck.

He then pulls up his sagging pants and walks out of the store, past the skid marks of his pickup truck that left an outline on the floor.

No one was injured inside or outside the store, but broken bottles of liquor later seeped into a floor outlet, creating smoke under the pickup truck, according to the Oakland County Sheriff's Office.

An employee recognized Edmonds as a regular customer in the store and he told officers before the crash that the suspect bought a beer and opened it before entering his vehicle, according to ABC 12.

THIS CLASSIC FORD BRONCO IS POWERED BY AN ELECTRIC 'V8'

A K9 unit attempted to trace Edmonds but lost his scent past an intersection down the street.

Investigators continued to check in on his residence in Groveland Township, arresting the suspect when he returned to the home on Friday, roughly 13 hours after the crash, the outlet reported.

After his arrest, he told officers he had just gotten new tires and wanted to speed around the pumps when he lost control of his pickup truck.

Edmonds told them he had been drinking beer and didn't mean to hit the building or injure anyone. He added that he ripped off his license plate after getting scared following the crash, according to ABC 12.

The Oakland County Prosecutor's Office charged Edmonds with reckless driving and leaving the scene of an accident. His bond was set at 5,000. He was ordered never to return to the gas station and submit to alcohol and drug testing twice each week.