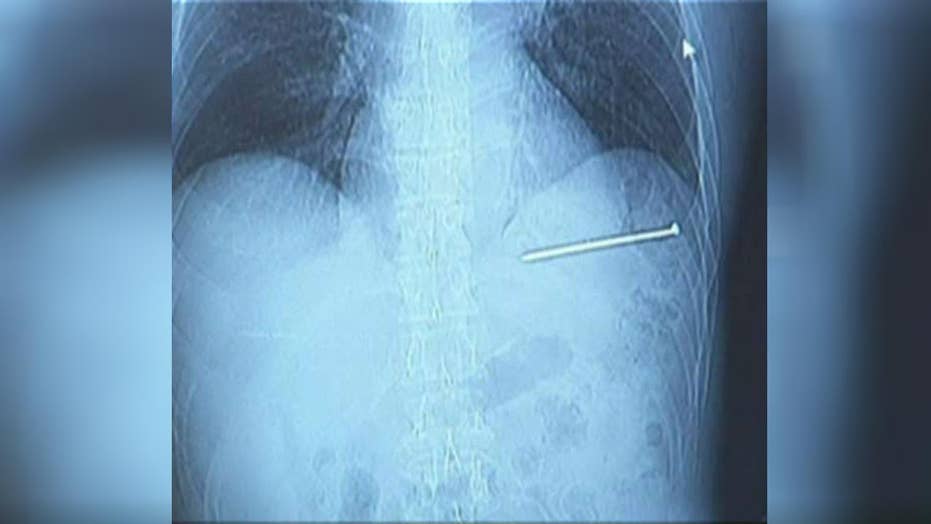 MILWAUKEE – A Wisconsin man who doctors say came perilously close to death after accidentally shooting a nail into his heart while working on his house calmly drove himself to the hospital and even parked his pickup truck in the lot before walking into the emergency room.

Doug Bergeson is ready to get back to work this week after surviving a June 25 ordeal that others might not have taken in such stride. Bergeson was working on framing in a fireplace at his house when his nail gun accidentally fired, sending a nail ricocheting off some wood and into his chest.

"I thought it just nicked me. I looked down. I couldn't see anything," Bergeson said Tuesday in an interview with The Associated Press. "I felt OK. I wasn't worried about the injury. I couldn't feel any pressure or blood building up."

As he tugged at his sweatshirt, the 52-year-old said he realized only about an inch of the 3½-inch nail was sticking out of his chest.

"I could see the nail moving with my heartbeat. It was kind of twitching with every heartbeat," said Bergeson, who lives near Peshtigo in northeast Wisconsin.

He was more annoyed than worried. He knew he had to go to the ER.

"I was frustrated because I knew I wasn't going to get home until late and I couldn't get anything done," Bergeson said, adding that "common sense" told him not to pull the nail out.

So he washed up, hopped in his truck and made his way to Bay Area Medical Center in Marinette, about 10 minutes away. After parking his truck and walking into the ER, Bergeson said he started to feel more pain and summoned a security guard for help.

"If you could find someone that would be great, I'm just going to sit down," he told the guard.

Still thinking he would soon be on his way home after a little medical attention, Bergeson texted his wife, Donna, to bring him a new shirt because medical staff had cut off the one he was wearing.

After X-rays were taken, Bergeson was rushed by ambulance to Aurora BayCare Medical Center in Green Bay. "I offered to drive myself, but they wouldn't let me," Bergeson said, chuckling.

Dr. Alexander Roitstein confirmed the nail hit Bergeson's heart, saying it was also 1/16 of an inch from a major artery. He said it was difficult to assess how deeply the nail penetrated, but the nail left bruising and a nail-sized hole.

He commended Bergeson for not pulling the nail out and letting doctors handle it. "It shows the great composure this gentleman had after a very bad day's experience," Roitstein said Tuesday.

Bergeson spent two days in the hospital and has been recovering at home. He will be able to return to work this week at the Village of Lena waterworks plant. He also has a vegetable farm and a construction business.

"I feel pretty good. I'm back to doing things carefully," he said. "It was a pretty awakening experience."