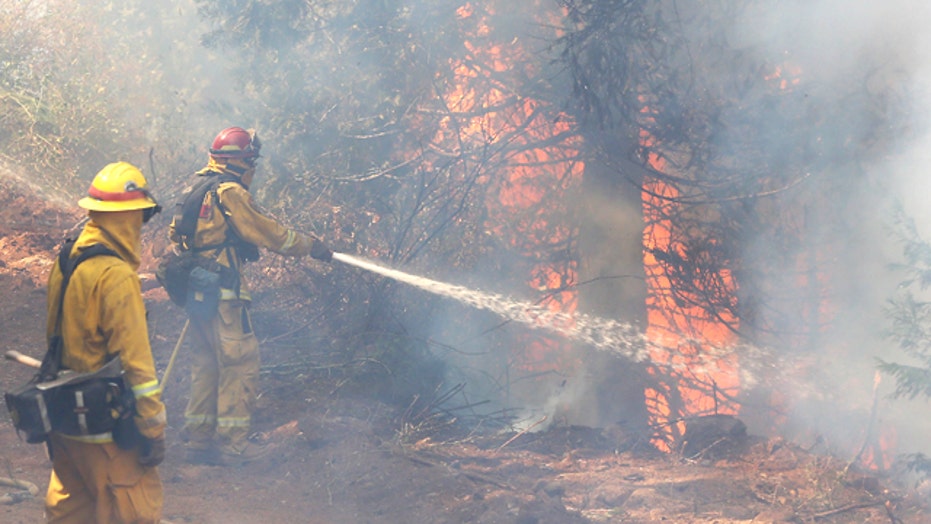 POLLOCK PINES, Calif. – A man has been arrested on suspicion of arson in an out-of-control Northern California wildfire that has driven nearly 2,800 people from their homes as it continues to grow, authorities said Thursday.

Wayne Allen Huntsman, 37, is suspected of starting the fire east of Sacramento on Saturday, authorities said at a news conference.

By Thursday, the blaze had burned through 111 square miles as winds surged to 25 mph and continued to fuel its rapid expansion, according to the California Department of Forestry and Fire Protection. It was 5 percent contained.

The blaze has been fueled by heavy timber and grass that is extremely dry because of California's third straight year of drought.

Many of the more than 2,000 threatened homes were in Pollock Pines, 60 miles east of Sacramento. Though the fire grew substantially late Wednesday, it burned mostly into wilderness land in the El Dorado National Forest away from the town, according to Cal Fire.

The blaze was burning about 20 miles from the Desolation Wilderness, a popular hiking area south of Lake Tahoe.

Gov. Jerry Brown declared a state of emergency late Wednesday, freeing up funds for the two fires. Brown also had secured federal grants to fight each of them.

Rain was possible in the area Thursday, though more gusty, erratic winds also were expected, and there was a chance of lightning.

Meanwhile, farther north in the town of Weed, teams of firefighters went house-to-house Wednesday to survey damage by a wildfire that officials estimated had destroyed 110 homes and damaged another 90. The damage assessment was expected to continue Thursday.

Four firefighters lost their homes. Two churches, a community center and the library also burned to the ground, while an elementary school and the city's last wood-products mill were damaged by flames that were pushed by 40-mph winds.

Insurance companies worked to find places to live for the people who lost their homes.

The cause of the blaze that rapidly swept across town was under investigation. It was 65 percent contained after burning 375 acres.