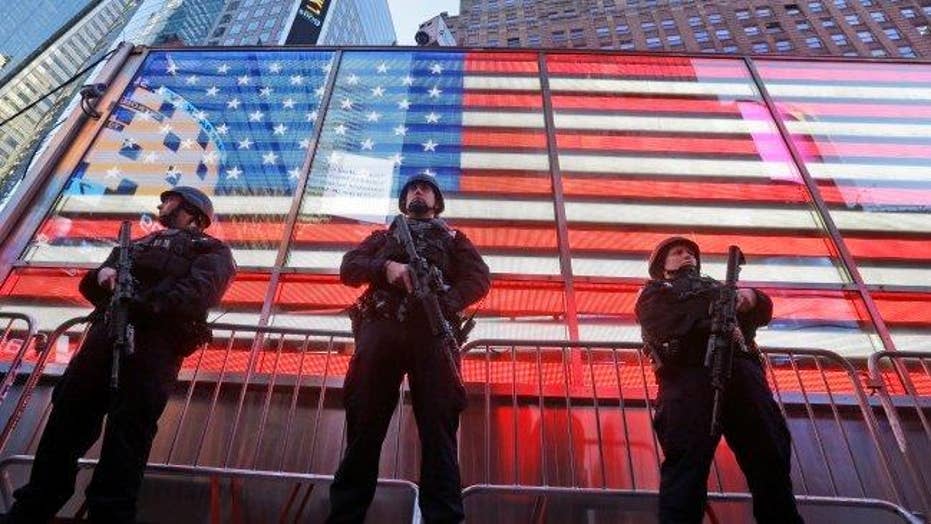 NYPD ramps up its presence at mass transit points

Hours after deadly explosions ripped through the Brussels airport and a subway station in the city on Tuesday, officials in major U.S. cities including New York City and Los Angeles announced they were ramping up security at airports and transit systems.

The New York Police Department is increasing visible presence of officers on the streets and in the subway system across the city's five boroughs.

"We are in a high state of vigilance and readiness,” Mayor Bill de Blasio told reporters.

The Port Authority Police Department is stepping up security at the three major airports in the New York City area. It's also employing high visibility anti-terrorist patrols throughout the World Trade Center site and the PATH train system that runs to and from New Jersey.

Agencies in Washington are stepping up law enforcement presence around the metro area in ways that will be seen and unseen, a law enforcement source tells Fox News. This source says people in the area can expect to see more cops on the street, specifically in heavily populated areas, as well as a roving police presence on the Metro system.

No known, specific or credible threat to Metro at this time. Additional K9 sweeps + patrols starting this AM as precaution. #wmata

Air travelers nationwide can expect to see increased behavior detection and K9s in non-sterile airport zones, a separate law enforcement source says. Fox News is told the heightened posture will not be specific to major airports, and that screenings will be stepped up at local airports as well.

The Los Angeles transit system tells Fox News its security will be boosted today as well. Police at Los Angeles International Airport said they were meeting with command staff.

Officials in Georgia say Hartsfield-Jackson Atlanta International Airport, the world's busiest in terms of passenger traffic, "remains on heightened alert and will continue to coordinate with federal, state, and city law enforcement."

Explosions, at least one likely caused by a suicide bomber, rocked the Brussels airport and subway system Tuesday, prompting a lockdown of the Belgian capital and heightened security across Europe. At least 28 people were reported dead.

"At this time, there is no known indication that the attack has any nexus to New York City. We will continue to follow the situation in Belgium closely with the Joint Terrorism Task Force and the FBI and adjust the department's deployments accordingly," NYPD spokesman Stephen P. Davis said.

"As we continue to monitor intelligence reports and work with our federal partners to authenticate and determine the credibility of this threat, we ask residents to also stay alert of their surroundings. If you see something, say something," D.C. Metropolitan Police Chief Cathy L. Lanier added.

The Paris airport authority said security was tightened at all Paris airports soon after the Brussels explosions on Tuesday morning. Airports in London, Prague, Amsterdam, Vienna, and many others, also saw increased security.