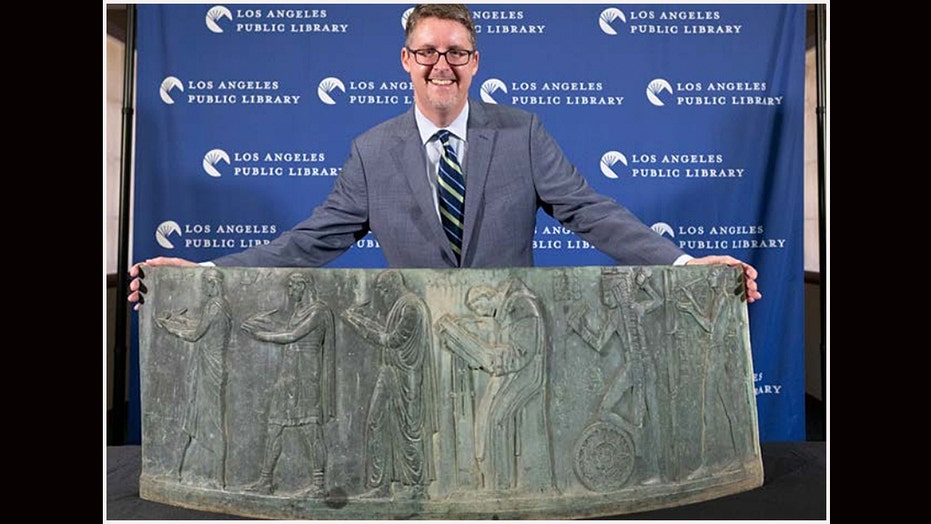 Fifty years after a three-panel bronze sculpture disappeared from the grounds of the Los Angeles Public Library, one of the panels has been found.

The "Well of the Scribes" vanished in 1969 when gardens in front of the library were demolished to make way for a parking lot, according to reports.

"The gardens were fortunately restored in 1993, but the Well of the Scribes went missing," said City Librarian John Szabo told KABC-TV Friday.

Author Susan Orlean referenced the sculpture in her 2018 bestseller “The Library Book.”

That inspired the managing editor at Alta magazine to commission an article about the missing sculpture which ran over the summer, The Los Angeles Times reported.

An antiques dealer in Arizona read the article and recognized the sculpture, according to the paper.

A bronze panel the dealer bought for $500 years earlier and kept in his apartment was a piece of the artwork, the paper reported.

The dealer gave the panel back to the library, which unveiled it Friday.

LIBRARY BOOK RETURNED WITH FULL TACO SHOVED BETWEEN ITS PAGES

“Up until now, we thought [the sculpture] might have been destroyed or was in someone’s backyard,” Szabo said, according to the Times. “We just didn’t know if it would ever be found.”

The "Well of Scribes" went on display in the gardens when the Library opened in 1926. According to the paper, the sculpture pays homage to history’s great writers.

Now the Library wants to solve the rest of the mystery and find out what happened to the other two missing panels.

"We've always been hopeful,"  Szabo told KABC, "but I think we're especially hopeful now that part of it has been discovered, that we might find the other two pieces."