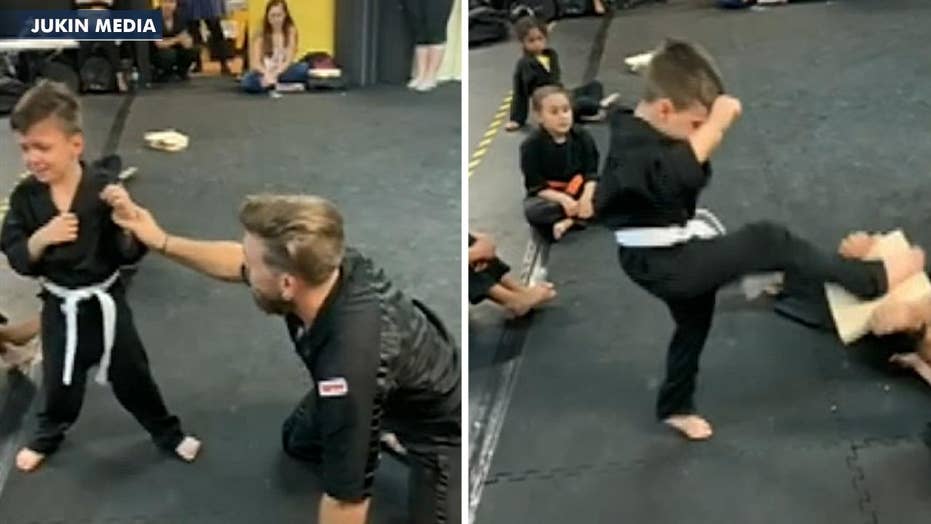 Karate class cheers on student having trouble breaking board

Raw video: Little boy in Orlando, Florida having difficulties breaking board in karate class, inspired by other students cheering him on.

A heartwarming viral video shows students in a children’s karate class supporting one of their classmates as he struggles to break a board.

In the video, which was filmed at an Orlando, Florida, martial arts dojo, a little boy attempted to kick through a small board held by his teacher.

The boy fell to the ground after his first try, and visibly teared up after several more unsuccessful attempts.

Adorably, his classmates began chanting his name and cheered him on, inspring him to keep trying.

Finally, he was able to kick through the board and was immediately swarmed by his classmates and instructors in a joyous, celebratory group hug.

The boy, Phoenix Swonger, appeared on "Fox & Friends" Wednesday, along with his father, Tom Swonger, and karate instructor, Erik Gianini, to break down the epic viral video.

Gianini explained that Phoenix was a white belt and he would not have have advanced ranks to yellow belt if he didn't break the board.

"He went from not thinking he could do it to really going in there and getting his belt and breaking that board, man," Gianini said.

Phoenix said he was a little down after several attempts, but he felt "really good" when he finally succeeded and got such a positive response from his classmates.