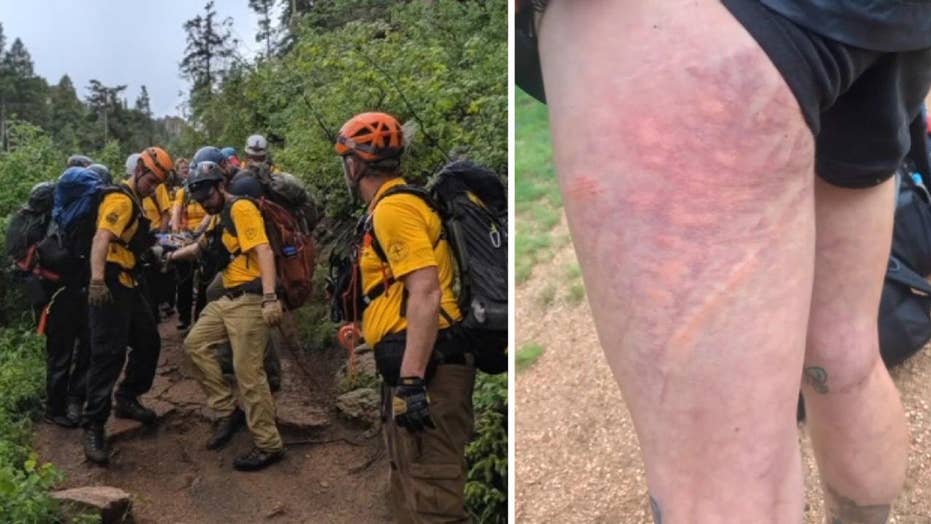 Several people were injured -- including one critically -- when lightning struck near a group of hikers in Colorado on Sunday, according to officials.

The Douglas County Search and Rescue said on Facebook the incident happened around 3 p.m. on the Devil's Head trail in Douglas County, located about 50 miles south of Denver. A total of 8 hikers reported injuries, according to the agency.

“It was easily the scariest thing that will probably ever happen in my life,” Sydney Copeland told FOX31.

Copeland said she was seeking shelter under a rock face wall with her boyfriend and several hikers when the lightning struck. The group was climbing near the Chicken Head Rock area when the bad weather approached suddenly.

A group of hikers were injured in a lightning strike in Colorado on Sunday. (Douglas County Search and Rescue)

“I think from when it first started precipitating to when we all took shelter and got struck -- it was like 10 minutes," she told FOX31. "The girl behind me, I think she got struck and it traveled through my boyfriend to me. She fell forward and was paralyzed pretty instantly.”

After the strike, one of the hikers had to run about a mile and a half in order to get phone service to call 911. Several agencies then responded to the scene and found the hikers all "conscious and breathing."

The incident happened on the Devil's Head trail in Douglas County, located about 50 miles south of Denver. (Douglas County Search and Rescue)

So far this year, there have been five lightning strike-related deaths this year, according to the National Weather Service. Those deaths were reported in Florida, Texas, Kentucky and Pennsylvania.

A woman told Colorado she was seeking shelter with a group of hikers when the lightning struck nearby. (Douglas County Search and Rescue)

On average, lightning strikes kill about 50 people in the U.S. each year. The odds of being struck in your lifetime are 1 in 13,000, according to the National Oceanic and Atmospheric Administration.