Leo Terrell: 'Disingenuous' of NBA players to determine Blake case before facts are in

The decision by NBA players to stage a boycott of playoff games to protest the police shooting of Jacob Blake is "disingenuous," civil rights attorney Leo Terrell argued Thursday on "Bill Hemmer Reports".

The NBA has announced that its games scheduled for Wednesday and Thursday would be postponed after the Milwaukee Bucks remained in their locker room prior to Game 5 of their first-round series against the Orlando Magic. Other teams in the NBA's Orlando bubble quickly followed suit.

"I find it disingenuous for them to make a determination about this situation before all facts are in," Terrell said. "This is not George Floyd. They use [these cases] as a pretext." 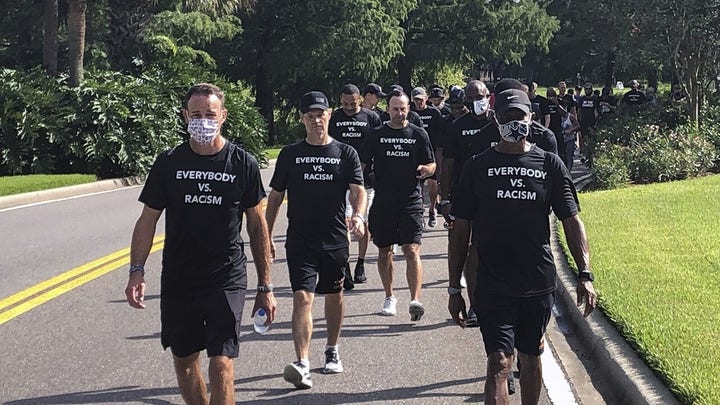 Earlier in the segment, Terrell took issue with the idea that African-Americans live in fear of law enforcement.

"Every black man doesn’t feel like they’re being chased by the police," he said. "Tim Scott, senator of South Carolina -- 18 stops by police -- this man does not look at the police officers as bogeymen."

Scott, who is Black, stated in his remarks at the Republican National Convention Monday that he has been stopped by law enforcement 18 times in 20 years, but still reveres the institution of law enforcement.

"Tim Scott has been stopped numerous times and he does not have this bogeyman," Terrell continued. "Black people do not have a racial animus towards police officers. Why? Because there are black police officers [too]... This is not 1950."

Terrell told Fox News correspondent-at-large Geraldo Rivera he has represented clients in police misconduct cases for decades, and has never seen a pretense to begin rioting, looting and assaulting civilians before formal litigation or investigation.

"We are a nation of laws," he said before criticizing Demorats for remaining silent while American cities burn before Joe Biden issued a statement condemning rioting in Wisconsin Wednesday.