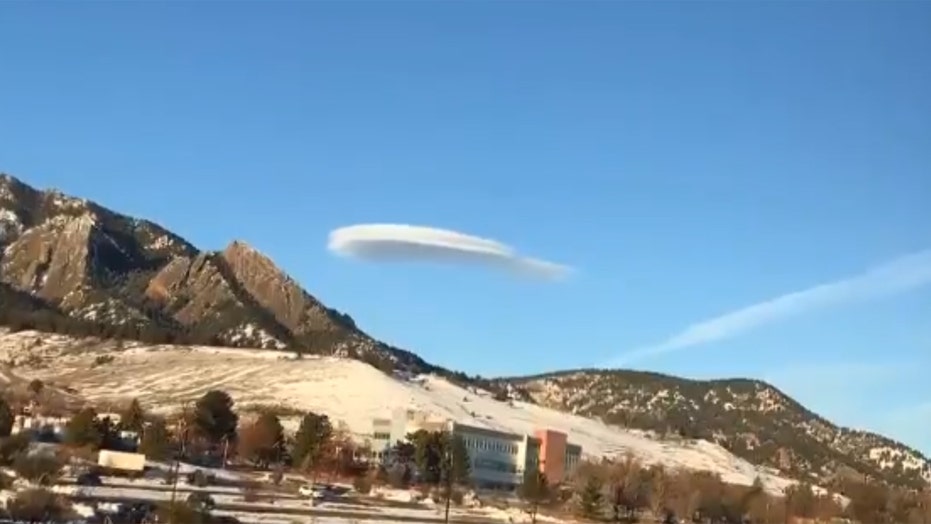 A mysterious sight in the skies over Colorado last week wasn't a plane or UFO, but actually a particular type of cloud that tends to form near mountains.

The National Weather Service shared a video on Twitter of what's known as a lenticular cloud hovering near the David Skaggs Research Center in Boulder, a research facility for the National Oceanic and Atmospheric Administration's (NOAA) Earth System Research Laboratory.

The weather service said the cloud hovered over the area for between 60 to 70 minutes.

In the time-lapse video released by the NWS, the cloud simply hovers and reforms as higher clouds move past it.

According to the NWS' Albuquerque forecast office, lenticular clouds are associated with waves in the atmosphere that develop when relatively stable, fast-moving air is forced up and over a topographic barrier that is oriented perpendicular to the direction from which the upper-level wind is blowing, such as mountains.

"This deflection creates a gravity wave downwind of the topographic barrier not unlike a wave you might generate by throwing a pebble into a pond," the agency states.

The lenticular cloud hovered over the area for 60 to 70 minutes, according to forecasters. (NWS Boulder)

When there is sufficient moisture present above the top level of the mountain, the clouds develop within the crest of the mountain waves where the air is rising.

"ACSL clouds are continually developing and dissipating in the vicinity of the wave's crest and immediately downwind of the crest, respectively," according to the NWS. "That is why they appear to remain stationary (hence the name) even though winds are swiftly (sometimes very swiftly) moving through the entire cloud."

A spiral cloud seen in southern England has baffled experts and has posed more questions than answers.

Forecasters say the clouds are most often seen in the winter or spring, when winds aloft are typically the strongest.

"When aircraft encounter a mountain wave, severe turbulence is often the result," the NWS states.

"They look a lot like the traditional shape of flying saucers in science fiction, and real lenticular clouds are believed to be one of the most common explanations for UFO sightings across the world," U.K.'s Met Office explains.