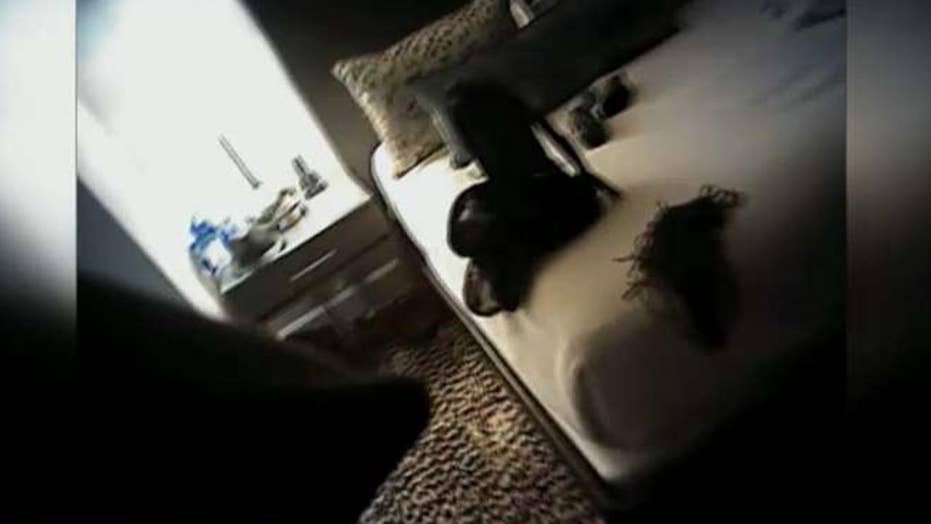 Newly-released tapes include footage of cops walking through Stephen Paddock's hotel room and some of them walking past Paddock's hotel food cart that he used to monitor the hallway outside. #Tucker

As the deadliest mass shooting in modern U.S. history unfolded on the Las Vegas Strip on the night of Oct. 1, 2017, country music concertgoers were "lit up like a fishbowl," according to witness accounts released by Las Vegas police on Wednesday.

The department released 1,200 pages of reports, including witness statements and officer testimony, on the shooting massacre that left 58 people dead and hundreds injured after gunman Stephen Paddock opened fire on the crowd of 22,000 people.

Surveillance video shows Stephen Paddock taking suitcases up to his hotel room in the days before the Las Vegas massacre; Adam Housley reports from Los Angeles.

One witness told police that as the shooting unfolded, she heard what people were calling fireworks while singer Jason Aldean was on stage. She was shot just seconds later.

Another woman who watched the chaos unfold said she knew she wasn't hearing fireworks when a man near her dropped to the ground with his "eyes wide open lifeless."

"OMG, there's tons of gunshots and people dead everywhere," the concertgoer texted her sister-in-law, once she took cover at the concert stage. She said she had to jump over a security guard's dead body to get there.

The woman's account of what happened outside the Mandalay Bay resort that night was provided by Las Vegas police in a DVD with witness statements and officer reports about the massacre.

The documents were court-ordered to be released to the public. Two weeks ago, the department released body camera footage of police officers entering and combing through gunman Stephen Paddock’s hotel room at the Mandalay Bay resort.

Lawyers for the police department argued that the media’s public records requests were costly and time-consuming and releasing the information could disclose investigative techniques.

Clark County Sheriff Joe Lombardo said earlier this month the police investigation was not finished, and pointedly apologized for the release of information that he said would "further traumatize a wounded community."

Fox News’ Andrew Craft and The Associated Press contributed to this report.