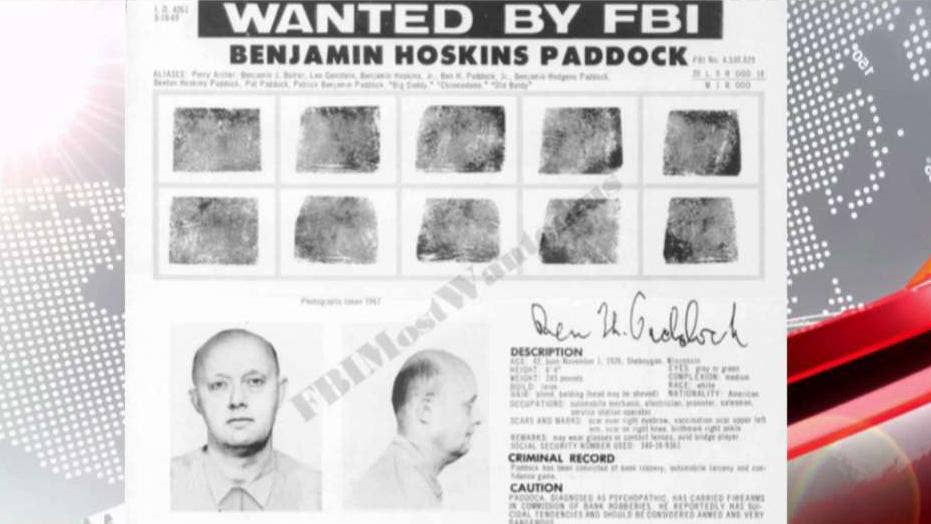 Benjamin Hoskins Paddock was a bank robber in the 1970s, was on the FBI's 'Most Wanted' list.

The father of the gunman behind the deadliest shooting in modern U.S. history robbed a string of banks in Arizona, escaped prison in Texas and tried to start a new life as the manager of a bingo parlor in Oregon, according to historical newspaper articles.

Eric, the brother of Las Vegas shooter Stephen Paddock, who killed at least 59 people from his hotel room at the Mandalay Bay Resort and Casino late Sunday, told the Orlando Sentinel that their father was Benjamin Hoskins Paddock.

The elder Paddock, born in Wisconsin in 1926, had a host of other fake names and nicknames, including “Big Daddy” and “Old Baldy," and was on the FBI’s Top Ten Most Wanted list from 1969 to 1977.

Paddock was indicted in 1960 on three counts of robbing Phoenix branches of Valley National Bank, the Arizona Republic reported on Oct. 6 that year. He was accused of stealing close to $25,000 and was caught in the summer of 1960 by FBI agents in Las Vegas.

"The FBI said Paddock tried to resist arrest and attempted to run down an agent with his car," read a July 28, 1960, report from the Tuscon Daily Citizen.

The 6-foot-4, 245-pound Paddock was convicted and slapped with a 20-year prison sentence, but the lengthy jail term was cut short when he busted out of a federal prison in Texas in 1969, the Eugene Register-Guard reported.

STEPHEN PADDOCK: WHAT WE KNOW ABOUT LAS VEGAS SHOOTING SUSPECT

An escaped federal prisoner poster issued by the FBI at the time said Paddock was “diagnosed as psychopathic” and “reportedly has suicidal tendencies and should be considered armed and dangerous.”

About six months after the escape, Paddock was involved in an armed robbery at a bank in San Francisco and in September 1978, he was awaiting trial related to charges from that incident, according to the Oregon newspaper.

“My view is let him go… and good riddance.”

Paddock, described by the FBI as being an “avid bridge player,” had managed to live a secret life centered on another game --bingo -- as a parlor manager in Springfield, Ore.

The FBI said Paddock lived for years in the Eugene-Springfield area under the alias of Bruce Werner Ericksen and managed to stay one step ahead of law enforcement by constantly changing his appearance and avoiding contact with police, which may have resulted in fingerprinting, the Eugene Register-Guard reported.

The man dubbed by the newspaper as “Bingo Bruce” appeared to have run out of luck in 1978 when he was arrested, but the feds paroled him and he was back in the number-calling game just a year later.

“He was a nice guy, and helped a lot of people financially and did one hell of a lot for the kids,” former Junction City Mayor Chuck Ivey, who was on the parole board, told the newspaper.

“All that stuff is old news,” Ivey said when he asked about Paddock’s past.

In 1987, the gig finally ended when the Oregon Attorney General’s Office filed seven racketeering charges against Paddock related to his bingo operation. On top of that, he was charged with rolling back car odometers.

Paddock settled the racketeering charges for $623,000 and pleaded no contest to the odometer case, while simultaneously claiming he had cancer.

Among his other life claims: being an auto crew racing chief, Chicago Bears football player and survivor of a World War II mine sweeper sinking, according to the Eugene Register-Guard.

When the final verdict in Paddock’s legal saga came in, and Circuit Judge George Woodrich decided to let him off with a $100,000 fine and no jail time.

“He could be conning everybody, but this is an economic crime and he’s an old man,” the newspaper quoted Woodrich as saying. “My view is let him go… and good riddance.”

Paddock then went back to the Lone Star state and lived there until his death in 1998. Laurel Paulson, a woman he met while living in Oregon, told the Eugene Register-Guard that he got by on a VA pension and helped her run a machine shop.

“He was a man that people either loved or hated,” she said. “He always said he was a dinosaur.”