One suspect has been charged with abuse of a corpse and tampering with evidence after human remains are found at a home believed to be the last known location of missing Kentucky mom Savannah Spurlock; Mike Tobin has the details.

A man questioned by police in the disappearance of missing Kentucky mom Savannah Spurlock was arrested on desecration charges early Thursday after officials said human remains were found at a home believed to be Spurlock's last known location -- and which authorities have searched before.

David Sparks, one of the last people believed to be with Spurlock, was taken into custody and charged with tampering with physical evidence and abuse of a corpse. He was booked into a jail in Madison County.

David Sparks was reportedly charged with abuse of a corpse and tampering with physical evidence after human remains were found at a home believed to be the last known location of missing Kentucky mom Savannah Spurlock.  (Madison County Detention Center)

The remains will be taken to the State Medical Examiner's Office in Frankfort, Ky., Kentucky State Police Trooper Robert Purdy said. He said he cannot confirm the remains found are those of Spurlock at this time because they were heavily decomposed.

The latest development came after a man reported a foul odor coming from the property, where Sparks lives, according to an arrest citation for Sparks obtained by WKYT.  That tip coupled with Sparks being "the primary suspect in a missing persons investigation" led to the search, during which officials say they found remains -- and other items -- buried on the property.

"These items were last known to be in the control of only two individuals, the missing person, and the above," the citation states, according to WKYT.

Spurlock, a mother of four who had given birth to twins in December, was last seen on surveillance video Jan. 4 after leaving The Other Bar in Lexington with two men. 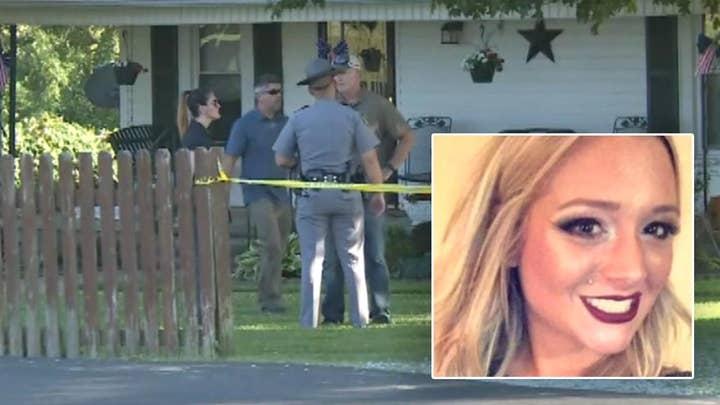 Lt. Col. Rodney Richardson, assistant chief of police with the Richmond Police Department, told Fox News that Spurlock’s last known location was at the home in Garrard County – located some 40 miles from the bar.

The house reportedly belongs to Sparks' parents and had been previously searched on Jan 22, police said, according to Lexington’s WLEX-TV.

Police questioned the two men seen on surveillance as well as a third man when Spurlock first disappeared but did not file charges against them. Search and rescue teams that specialize in K9 searches swept the cornfields and a bridge near the home where the mother of four was last tracked in the months since her disappearance. In April, police received a tip that lead them to search a cave but nothing was found, WLEX-TV reported.