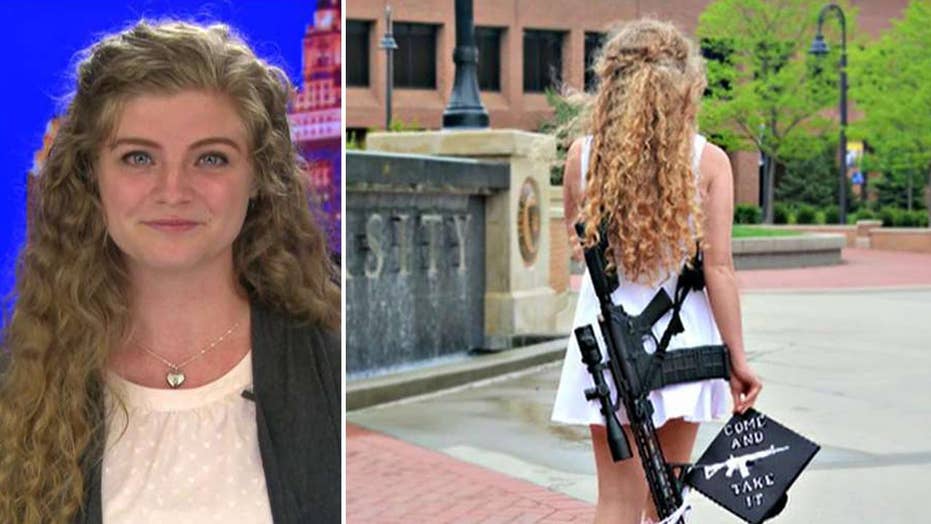 Conservative gun-rights activist Kaitlin Bennett, who went viral in 2018 as the “Kent State gun girl,” was confronted by protesters during her visit to Ohio University Monday.

Sharing video of an angry crowd appearing to curse at her and toss a clear liquid into the open window of her truck, Bennett claimed the event amounted to a “riot.” She also called on President Trump to strip federal funding from the university for harboring "terrorists" after she said campus police just “let it happen.”

“This is what happens when a Trump supporter goes to a college campus. Leftists at @ohiou started a riot when @Joelpatrick1776 and I showed up, and the @oupolice let it happen,” Bennett tweeted. “I think @realDonaldTrump should strip funding from universities like this that harbor terrorists.”

Bennett's first claim to fame came in May 2018 after she posed with an AR-10 rifle immediately following her graduation from Kent State University,  about 40 miles south of Cleveland. She wore a white dress, had her gun slung over her shoulder and flashed a graduation cap that read “Come and take it.”

Bennett's aim was to condemn the school's "insulting" anti-gun policies. As a student, she wasn't allowed to openly carry a firearm on the campus.  Ohio is an open-carry state.

A Second Amendment supporter and grassroots director for libertarian website Liberty Hangout, Bennett has appeared in a series of online videos in which she takes to the street to ask members of the public their opinion on issues, including abortion and gun control.

Other social media users shared video of crowds shouting at her both inside and outside of campus buildings. In some footage being shared online, Bennett could be seen being carried out by her private security guard.

“#PoopyPants @KaitMarieox didn't have a good time at OU today. Got picked up by her bodyguard and taken away in a hurry,” the same user, Nfinite Buchmn, wrote in a tweet with the video. “She probably had an emergency she had to take care of. 💩”

“So Kent state gun girl came to Ohio University and it didn’t end well lol. #OU,” another user tweeted, sharing a video showing Bennett and her team descending an escalator from the second floor of a campus building flooded with protesters.

Ohio University Police released a statement following the incident, explaining that “an activist appeared unexpectedly” on the campus in Athens where she “engaged in a constitutionally protected activity.”

“She drew a large crowd of people, many with opposing viewpoints, who also chose to exercise their First Amendment rights,” the statement said. “Ohio University police officers were present throughout the incident to protect everyone’s rights and safety; other than keeping streets and other public rights of way clear, no police officers asked anyone to leave at any point in time.

“Contrary to allegations circulating on social media, the incident did not rise to the level of a riot,” university police said. “There was strong language, and allegations that some unknown person(s) in the crowd splashed water, but there were no reported injuries or violence, and no one was arrested during the event.”

The statement also noted that, although it’s not required, the activist did not give the police prior notice of her plans, depriving “the department of the ability to plan staffing levels.”