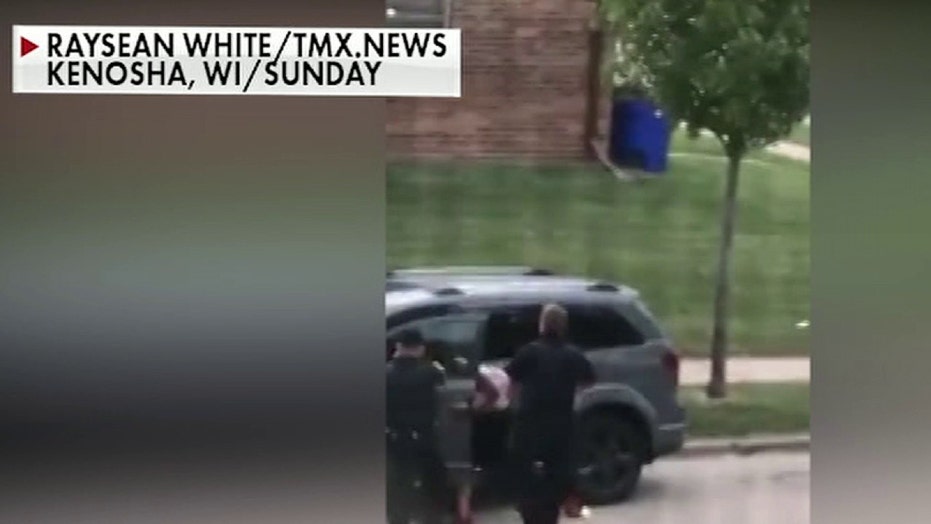 Police and protesters in Kenosha, Wis., clashed for a second night Monday following the shooting of a Black man that touched off civil unrest similar to that in other cities across the country.

Officers deployed tear gas in an attempt to disperse a crowd outside the Kenosha County courthouse. Gov. Tony Evers deployed 125 Guard members to the city in an effort to prevent the kind of violence and vandalism that occurred in the city on Sunday night.

Multiple fires were reported across the city late Monday night. Stephanie Haines, a reporter for TMJ4, reported that downtown Kenosha is filled with smoke.

The unrest continued overnight, as video appeared to show a car dealership in Kenosha being looted, while others stomped on cars and pulled down street lights. Earlier, a furniture store was looted and set on fire. The Wisconsin Department of Corrections building was also reportedly set on fire.

Several businesses in the city's Uptown district were ablaze by 1 a.m., which one New York Times reporter called "Just a horrible scene."

In another video, a protester was allegedly heard arguing how: "the value of property has nothing to do with the value of life."

An 8 p.m. curfew was imposed and exit ramps off Interstate 94 from the Illinois state line into Kenosha County were closed Monday night, blocked off by police vehicles and trucks in some places.

Protesters chanted "No Justice, No Peace," minutes before the curfew went into effect and ignored orders to go home. Some officers were targeted with water bottles and other objects but it was not clear if anyone was injured.

The anger comes after the shooting of Jacob Blake, a 29-year-old Black man who was shot multiples times Sunday during an encounter with Kenosha police. Officers were initially called to a domestic dispute. At one point, Blake leaned into an SUV with his three children inside and an officer fired several shots, reports said.

Blake was hit in the back and hospitalized in serious condition. The encounter was captured on cellphone video.

Tensions flared anew earlier Monday after a news conference with Kenosha Mayor John Antarmian, originally to be held in a park, was moved inside the city’s public safety building. Hundreds of protesters rushed to the building and a door was snapped off its hinges before police in riot gear pepper-sprayed the crowd, which included a photographer from The Associated Press.

Evers and a number of other Democrats condemned the shooting. Democratic presidential nominee Joe Biden called for “an immediate, full and transparent investigation” and said the officers “must be held accountable.”

“This morning, the nation wakes up yet again with grief and outrage that yet another Black American is a victim of excessive force,” he said, just over two months before Election Day in a country already roiled by the recent deaths of George Floyd in Minneapolis, Rayshard Brooks in Atlanta and Breonna Taylor in Louisville, Kentucky. “Those shots pierce the soul of our nation.”

Republicans and the police union accused the politicians of rushing to judgment, reflecting the deep partisan divide in Wisconsin, a key presidential battleground state. Wisconsin GOP members also decried the violent protests, echoing the law-and-order theme that President Trump has projected during his campaign.

“As always, the video currently circulating does not capture all the intricacies of a highly dynamic incident,” Pete Deates, president of the Kenosha police union, said in a statement.