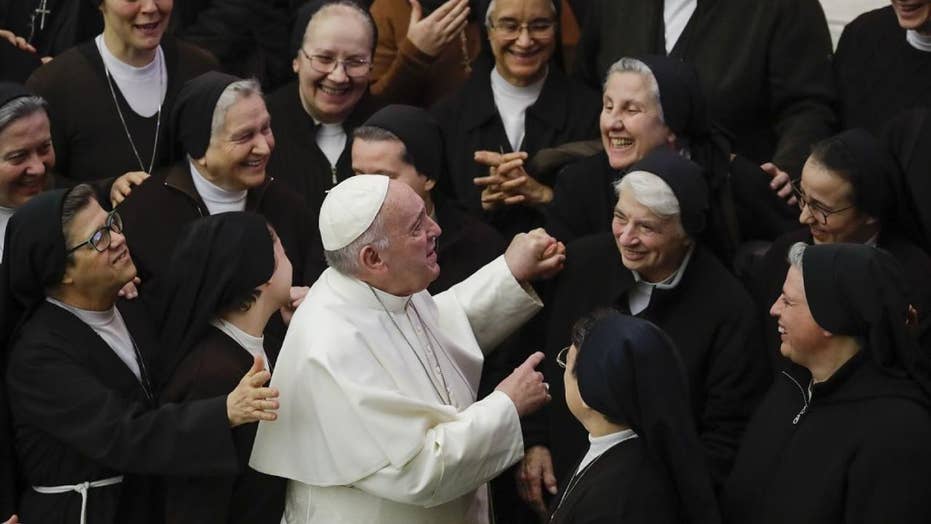 Catholic Church struggles to save nuns in America

The Catholic Church is struggling to maintain its ranks of nuns in America.

But today, the nuns' time-honored pledges of service, chastity, poverty, and obedience seem far removed from the modern orbit in which we live – igniting a vocal push to save nuns across the nation. For years, the number of women donning habits and devoting their lives to the Lord has been declining, raising fears that the several hundred orders of nuns are not only endangered but teetering on the edge of extinction.

In 1965, there were 180,000 Catholic sisters in the United States. But according to the National Religious Retirement Office, in 2019, there were just 31,350 in 411 institutes. The trend, which is being echoed globally, is making it difficult to find enough nuns to serve in convents and Catholic schools, a problem exacerbated by the fact that most existing nuns are elderly.

“The issue of aging is a valid concern for our entire church, including our aging volunteers, employees and parishioners,” Sister Deborah Marie Borneman, director of mission integration at the National Religious Vocation Conference, told Fox News. “However, the majority of newer members are not influenced by the age of the members of their religious institutes.”

Borneman said newcomers today are inspired by the women who came before them, "attracted to their institutes by the example of their members, especially the joy, commitment, and zeal.

“In a world of broken commitments, our Catholic sisters and nuns who celebrate 50 to 60 years of vowed communal life witness to a lifetime of holiness through prayer and ministry.”

But Borneman said more needs to be done to promote the sisterhood, including support from pastors, deacons, youth ministers and others.

Gaunt agreed that religious institutions, dioceses, and parishes nationwide have, in recent years, put more energy and resources into encouraging young women to consider a vocation built around a calling to religious life.

Of newcomers surveyed by the National Religious Vocation, 44 percent said that they were encouraged to join by a friend, followed by priests at 41 percent, religious sisters or brothers at 40 percent, their mother at 31 percent, and their father at 28 percent. Seventy percent of the women had earned a bachelor’s degree before entering religious life.

So what can church leaders do now to secure the future of women in the sisterhood?

“First, talk about the validity of religious life as a Catholic sister and nun. There are so many misconceptions about who we are and myths about what we are called to be,” Borneman said. “Church leaders need to help provide accurate information to invite the next generation with confidence. Often, people have had little or no direct interaction with sisters/nuns, so misinformation is repeated, and that is not helpful.”

She underscored that resources – both written and digital – need to be amplified "to get into the hands, hearts, and minds of young adults."

In recent years, the notion of the “millennial nun” has drawn attention on the internet, giving rise to anecdotes of young women shunning the complex web of present-day existence and living their days in service of God. Researchers, however, say that most are not opting for the secluded nun life, but rather the visible sister role.

The modern sisterhood, while still deeply traditional, has become increasingly attuned to the present-day staples of social media and social activism.

Often opting for the hashtag #medianuns, the new sisters let the world into their traditionally quiet lives.

A peek at Virginia-based @SrBethanyFSP showcases her work in the church, mixed with baking endeavors, cross-country jet-setting, tongue-in-cheek memes, throwbacks to childhood, and beachside chilling with her sisters.

@SrEmilyBeata of Virginia brings advertisements for “theology on tap” – complete with a glass of cold beer, and the lure of “God is calling, what should I do?” as a means for interested persons to join the sisters at a speaking event.

And Sr. Benedicta, fsp @ForJoysSake of Boston, Mass., shares fun-filled YouTube videos on how to make a smoke bomb from Coca-Cola, mixed in with charity work, GIFs from “Friends” and humorous plays on liife without men.

There’s even a “dating” app for that. NVRC’s VocationMatch.com purports to “match” a candidate to their most suitable religious community following an interested individual’s online assessment.

But despite those efforts, drawing enough recruits remains an uphill battle.

"At least for the past four or five years, the number of women entering religious institutions has been relatively stable,” Father Thomas Gaunt, executive director of the Washington, D.C.-based Center for Applied Research in the Apostolate, told Fox News. “Around 200-plus women enter religious life each year in the USA.”

But the number of those who take their vows is outpaced by those ending their service. The average age of a Catholic nun in the U.S. is nearly 80, and convents around the country are shuttering.

Pope Francis greets a group of nuns during his weekly general audience, in Paul VI Hall at the Vatican on Wednesday. (AP Photo/Alessandra Tarantino)

Gaunt said the aging population of nuns is also "creating serious issues in terms of how the institute will care for the aging members.”

More and more sisters, for example, are having to move into assisted living centers and nursing homes, and convents are struggling to absorb those costs.

In May 2018, the Vatican issued guidelines that all contemplative communities, those established ostensibly for continuous prayer, need to have at least seven members – a standard many can no longer meet.

Weeks ago, the nearly 90-year-old Monastery of St. Clare – the last Catholic contemplative monastery in Tennessee -- quietly closed. The last few nuns said their final prayers and were sent elsewhere.

Only about one percent of today’s nuns in the U.S. are below the age of 40.

Catholic nuns and sisters have been a pivotal part of U.S. history dating back to 1727 when 14 French Ursuline nuns opened the first academy in New Orleans, which remains open today. Throughout the Civil War, the sisters nursed the wounded on both sides of the bloodshed, making trips to Washington to lobby generals for more assistance.

While sisters are colloquially referred to as nuns, there is a distinction with a difference. The church defines “nuns” as women who take solemn vows and are cloistered, residing and praying inside the monastery in a contemplative setting. “Sisters” are more focused on particular missions and visions, and instead take simple vows in what is termed the “apostolic” life.

Overall, Catholicism has dwindled nationwide, in part due to continuing fallout from the church's sexual abuse scandal and coverups. Pew Research studies suggest that 13 percent of all U.S. adults consider themselves “former Catholics” – now identifying as either Protestants, non-religious or having converted to another faith. By contrast, just 2 percent of U.S. adults are converting to Catholicism.

In 2014, Pew also concluded that “globally, the number of nuns is declining, but not nearly as fast as it is in the U.S.” Two years earlier, the Vatican pointed to the American sisters’spivot towards more social justice-driven issues as being out of line with the traditional tenants of Catholicism and highlighted that as a cause for dwindling numbers of recruits.

In particular, blame was directed at the Leadership Conference of Women Religious.

Founded in the 1950s, LCWR includes over 1,300 members who are members of 302 religious congregations endeavoring to collaborate with the Vatican to study trends within communities and stand in “solidarity with people who experience any form of violence or oppression.” The Vatican opened a formal inquiry, highlighting a prominent concern over the “prevalence of certain radical feminist themes incompatible with the Catholic faith.”

FILE - In this Sunday, April 1, 2018 file photo, nuns are silhouetted in St. Peter's Square at the Vatican. The Vatican is facing a dilemma after nearly all the nuns in a tiny French religious order threatened to renounce their vows rather than accept the removal of their superior. The standoff marks an extraordinary battle of wills between the Vatican and the group of 39 nuns who run homes for the aged in rural France. (AP Photo/Andrew Medichini, File)

However, with the advent of the seemingly more liberal Pope Francis in 2013, the controversial investigation – which was viewed by critics as an institutionalized attack on religious women who do critical work in communities – was shut down in 2015. Archbishop Gerhard Ludwig Müller, who initiated the investigation under Pope Benedict XVI, was axed from his role in the Congregation for the Doctrine of the Faith.

For those dedicated to the canons of tradition, the social justice model for the sisterhood is a turn-off. But in 2020, it is largely viewed as the best way to urge young women to join.

To be effective, it requires a delicate balance of old and new, experts say.

“While we still profess vows of poverty, chastity, and obedience, live in community and minister wherever the need is greatest, one of the changes for Catholic sisters is the comprehension of a global sisterhood, the recognition that there exists a wide variety of charisms in religious life, that Catholic sisters are diverse in their ages, cultures, races, ethnicities, education, and ministries,” Borneman said. “We are more acutely aware of the suffering in our world, we advocate for systemic changes through our words and actions.”

Yet the mission of the sisterhood remains the same.

“Collectively, we are the voice of the Gospel for the most neglected, forgotten and marginalized,” she added. “Our ministries have broadened beyond institutions to serving and living at the peripheries.”