Jurors were deadlocked Tuesday in the case of an Arizona border activist accused of transporting and harboring migrants while providing them with humanitarian aid.

The case against Scott Daniel Warren, a 36-year-old Arizona State University geography instructor, has aid groups worried as the Trump administration continues to clamp down on illegal immigration.

Federal prosecutors said Warren conspired to transport and harbor two migrants at a property used to provide aid to migrants in Ajo, a town near the U.S.-Mexico border.

In this 2018  photo, Scott Daniel Warren, who is charged with human smuggling, walks into U.S. District Court in Tucson. (Kelly Presnell/Arizona Daily Star via AP, File)

Defense attorneys argued that Warren was simply providing water, food and lodging when he was arrested in January 2018. They said Warren could not in good conscience turn away the migrants, who had crossed the desert into the United States.

He faced up to 20 years in prison.

Warren is one of nine members of No More Deaths, a humanitarian aid group that maintains a presence in the deserts of Arizona near the border. Volunteers often leave water, food, clothes and other supplies for migrants.

Thousands of migrants have died crossing the border since the 1990s.

On Monday, jurors in Warren's case told a federal judge they couldn't reach a verdict. The judge told them to keep deliberating and set a July 2 date for a status hearing. 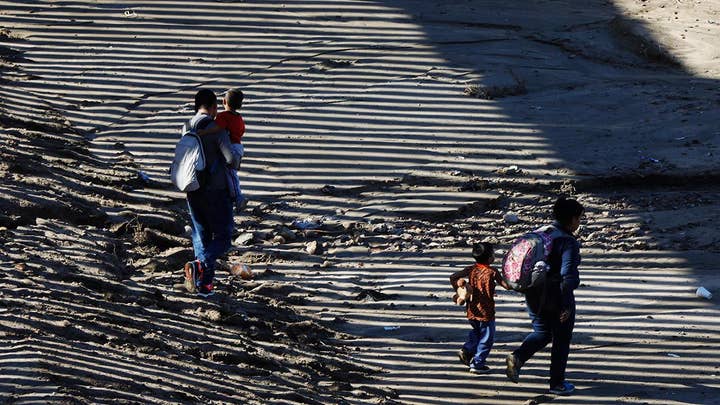 Warren is the only No More Deaths member to be charged with felony crimes related to his work. He and other members were targeted earlier this year in separate federal misdemeanor cases after leaving water, canned food and other provisions for migrants hiking through the Cabeza Prieta National Wildlife Refuge in southern Arizona.

The case against Warren has alarmed aid groups, who say their work is being criminalized.

Warren has said his case could set a dangerous precedent by expanding the definition of the crimes of transporting and harboring migrants to include people merely trying to help border-crossers in desperate need of water or other necessities.