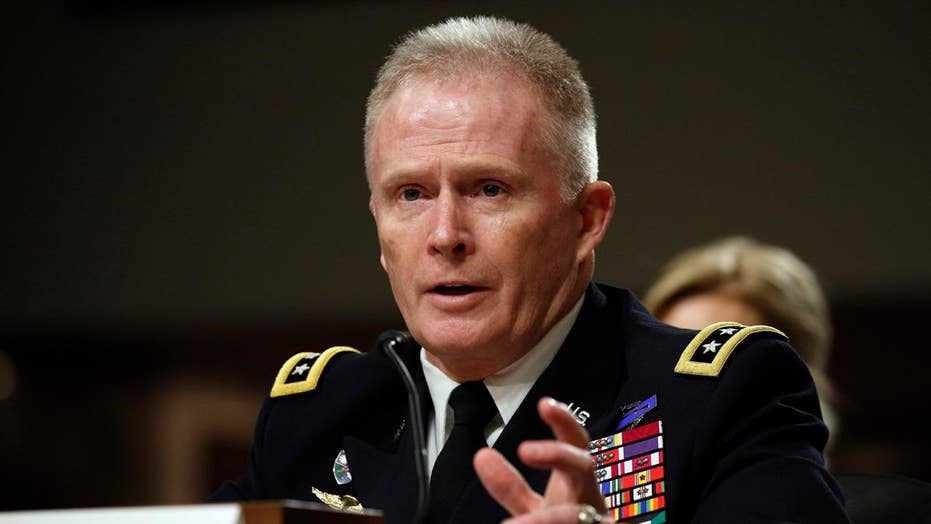 ASPEN, Colo. – ISIS in Iraq and Syria has been “dismantled,” with tens of thousands of its jihadist fighters dead, but a promising lead on its leader “went dead” after a media leak, according to a key U.S. military official.

“We have absolutely dismantled his network,”  Gen. Tony Thomas, speaking of Abu Bakr al Baghdadi, said at the Aspen Security Forum. “I mean everyone who worked for him initially is dead or gone. Everybody who stepped to the plate the next time [is] dead or gone. Down through a network where we have killed, in a conservative estimate, 60,000 to 70,000 of his followers, his army.”

In a wide-ranging interview moderated by Fox News' Catherine Herridge, Thomas, who leads the Special Operations Command, said his team was “particularly close” to Baghdadi after the 2015 raid that killed ISIS oil minister Abu Sayyaf. That raid also netted his wife, who provided a wealth of actionable information.

“That was a very good lead. Unfortunately, it was leaked in a prominent national newspaper about a week later and that lead went dead,” Thomas said. “The challenge we have [is] in terms of where and how our tactics and procedures are discussed openly. There's a great need to inform the American public about what we're up to. There's also great need to recognize things that will absolutely undercut our ability to do our job.”

Thomas appeared to be referring to a New York Times report in June 2015 that detailed how American intelligence agencies had “extracted valuable information.”

”New insights yielded by the seized trove – four to seven terabytes of data, according to one official – include how the organization’s shadowy leader Abu Bakr al-Baghdadi, operates and tries to avoid being tracked by coalition forces," the Times reported.

Thomas also provided new details about the military campaign in Libya. Fox News reported in 2015 that a half-dozen senior ISIS operatives travelled to North Africa to establish an ISIS satellite.

“They seized on Libya as a failed state…. They declared it a province. Our estimates were that, at the high-water mark, they had anywhere from 1,500 to 2,000 folks primarily located in a seaside town named Sirte. They don’t exist anymore.”

Commenting on media reports that the CIA ended a covert program to arm anti-Assad rebels in Syria, Thomas said the story, first carried in the Washington Post, was wrong to suggest the purported move was to appease Moscow.

“It was 'defeat ISIS,'" he said. "It’s now 'annihilate ISIS.' I think he put a non-doctrinal term out there to amp up the volume a little bit.  We all got the message.”

Despite recent victories, Thomas said the strategic picture remained complex, given activity of Syria, Iraq, Russia and Turkey in limited space. For U.S. pilots providing cover for ground operations, it can be "Top-Gun-nish," Thomas said.

“Right now, our pilots out there are getting painted radar-wise by Syrian aircraft [and] Russian aircrafts’ ground control intercept [have] that capability, so you can imagine how dicey it is for a pilot who's on top of us to give us the necessary protection," Thomas said. “[It’s a] pretty dicey situation in a very tight space there.”

As long as American military members are in harm's way, there remains the reality of casualties. And while strategy is always on the mind of Thomas, so to are the men and women who carry out the battle plans.

A frequent visitor to Walter Reed National Military Medical Center, who makes a point to meet his wounded warriors, Thomas said his personal visits, outside the media glare, did more for him than the soldiers.

“I'd like to think that I'm going to buoy their spirits,” Thomas said.  “But go in there and you'll walk out with one of the best buzzes you've ever had. In terms of resiliency of human beings, of service members who are not the least bit self-pitying. They want to think that they've helped accomplish something.”

The New York Times provided Fox News with the below statement Sunday.

"The raid against Abu Sayyaf occurred on May 16, 2015 and was announced that day in an official statement by Defense Secretary Ash Carter.  Below is an excerpt from the May 16 Pentagon press release:

'Last night, at the direction of the Commander in Chief, I ordered U.S. Special Operations Forces to conduct an operation in al-Amr in eastern Syria to capture an ISIL senior leader known as Abu Sayyaf and his wife Umm Sayyaf. Abu Sayyaf was involved in ISIL's military operations and helped direct the terrorist organization's illicit oil, gas, and financial operations as well. Abu Sayyaf was killed during the course of the operation when he engaged U.S. forces.

U.S. forces captured Umm Sayyaf, who we suspect is a member of ISIL, played an important role in ISIL's terrorist activities, and may have been complicit in what appears to have been the enslavement of a young Yezidi woman rescued last night.'

Baghdadi would have known that Umm Sayyaf, Abu Sayyaf's wife, was being held, if not from his own communications network then from the Pentagon’s announcement and news reports about that announcement. If the U.S. government wanted to keep the detention and likely interrogation of the wife secret, the Pentagon would not have publicly announced it.

The New York Times story you cite in your report was published on June 8, more than three weeks after the raid. The Times described the piece to the Pentagon before publication and they had no objections. No senior American official complained publicly about the story until now, more than two years later."