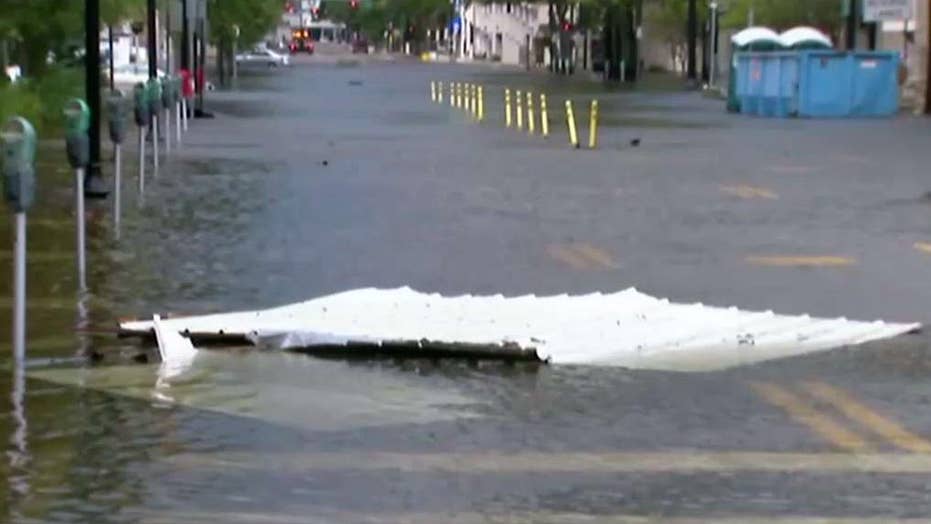 Irma's powerful winds triggered strong damage in the areas where the storm made a direct hit -- but for cities including Jacksonville, Fla., and Charleston, S.C., it unleashed pushing amounts of storm surge.

In fact, the storm surge flooding in Jacksonville broke a record, according to the National Weather Service.

Surge flooding water levels from the St. Johns River, under the Main Street Bridge, hit a record-high of 5.57 feet, the NWS reported. The previous surge record was 4.12 feet in September 1964 during Hurricane Dora.

Florida Highway Patrol tweeted that "Now is NOT the time to go sightseeting" in Jacksonville, and that dangerous conditions still persist throughout the city.

The City of Jacksonville tweeted that the flooding “is an incident of historic proportions. The St. Johns River has not seen these flooding levels since 1846.”

Fox News Correspondent Peter Doocy said Monday afternoon in Jacksonville that “there are basically whitecaps here,” standing in what was a typical city street before the floods began.

Severe flooding also appeared to take over the Jacksonville Landing, a marketplace downtown.

Meanwhile, Charleston’s downtown streets were experiencing “incredible flooding,” according to the NWS.

The surge in Charleston came from the Atlantic Ocean, and forecasters predicted that the water would push about a mile inland.

The Post and Courier reported that at least 100 roads in the Charleston area were shut down due to storm surge flooding, and reported that by 10:30 a.m., NOAA's tidal gauge in the area was at 7.5 feet.

A flash flood warning remains in effect for Charleston until 10 p.m. Monday. The NWS said "most flood deaths occur in vehicles," and added, "turn around, don't drown when encountering flooded roads."

Meanwhile, the death toll from Hurricane Irma continues to rise. At least three people died from the storm in Georgia, The Associated Press reported, bringing the total number of people dead from Irma to 44.