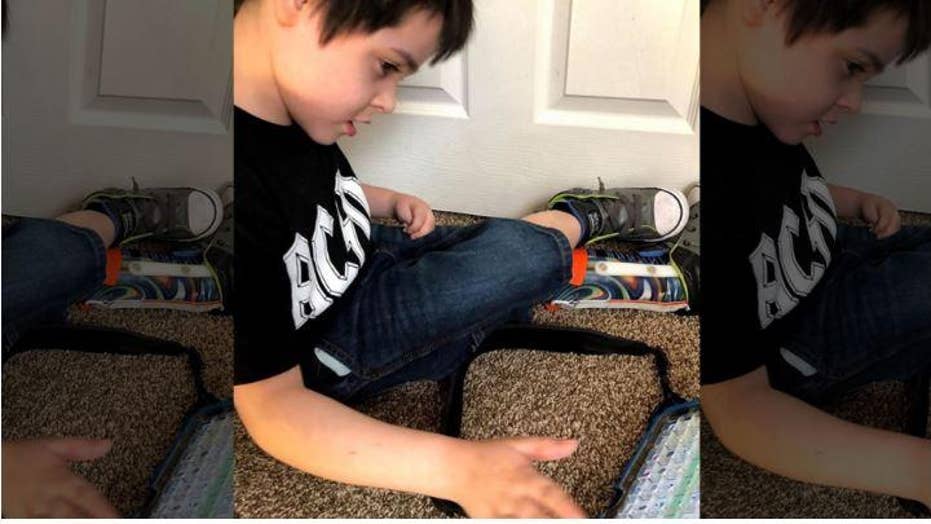 The theft renders an 8-year-old Iowa boy with special needs speechless. A thief broke into his family’s car over the weekend and stole a backpack containing a special device which helps him communicate.

An 8-year-old Iowa boy with special needs has literally been left speechless after a thief broke into his family’s car over the weekend and stole a backpack containing a special device that helps him communicate with others.

Kylar Mills was diagnosed as an infant with Hemimegalencephaly, a rare neurological condition that causes one side of his brain to grow faster than the other. As a result of the condition and the many surgeries he’s undergone, Kylar’s speech was impacted and he now requires a special device in order to express himself to those around him.

The boy's backpack was stolen out of her car last Friday sometime after 5 p.m., according to Kylar's mom, Cassie Thayer. In the bag was a change of clothes, a short ankle-foot orthosis and, most importantly, Kylar's “talker.”

“We had spent the weekend at home enjoying the nice weather, so we had no idea it was missing since I didn’t even realize I forgot his backpack in the car as I always bring it inside,” Thayer told Fox News.

The device Kylar uses has pictures or symbols he can press that will both show and say the word or sentence he types.

Kylar Mills was diagnosed with Hemimegalencephaly, a rare neurological condition that causes one side of his brain to grow faster than the other, when he was just an infant. (Cassie Thayer)

“It takes a truly sick person to break in and steal someone else’s belongings, even more sick to steal from a child with disabilities,” she wrote.

Over a week has passed since the device was snatched and Thayer says police haven't been able to track down the thief. For now, Kylar relies on his family and caretakers to understand what he needs on a day-to-day basis.

“He hasn’t had the use of his communication device so it’s mainly being hyper-aware of his needs," Thayer told Fox News. "We are lucky that mostly everyone is in his life who helps him has known him for some time and can usually tell what he needs. But we have also been avoiding any events that can stress him out or that can cause confusion since he doesn’t have access to his device.”

In addition to his speech impairment, Kylar also has a visual impairment that his mom says he is adjusting to. (Cassie Thayer)

Kylar, who was born prematurely, had his condition diagnosed shortly after birth. Doctors found the right side of his brain was growing faster than the left side.

At just 14 months old, he underwent a functional hemispherectomy -- which included the removal of a portion of the right side of his brain. As a result, he has no functional use of his left arm or hand and struggles with weakness in his left leg.

Kylar underwent revision surgery in 2014 when his seizures returned, and Thayer told Fox News her son has also been using medication to remain seizure-free for about a year.

Over a week has passed since the device was taken and Thayer says police have not had any luck in tracking down the thief. For now, Kylar relies on his family and caretakers to understand what he needs on a day to day basis. (Cassie Thayer)

In addition to his speech impairment, Kylar has a visual impairment that his mom says he is still adjusting to.

Thayer is working with the family’s insurance to try and replace the communication device, which she says retails for around $8,000. She said it may take months to process the claim, which could be detrimental to Kylar’s development.

The family has set up a GoFundMe account, in part to help cover the cost of the deductible.

Thayer says she knows the thief may now be aware the family is looking for the device and can’t understand what kind of person wouldn’t “rectify” such a situation.

“Please understand your actions have impacted the daily life of a child who has already faced his unfair share of hardships," she said. "You have contributed to that.”