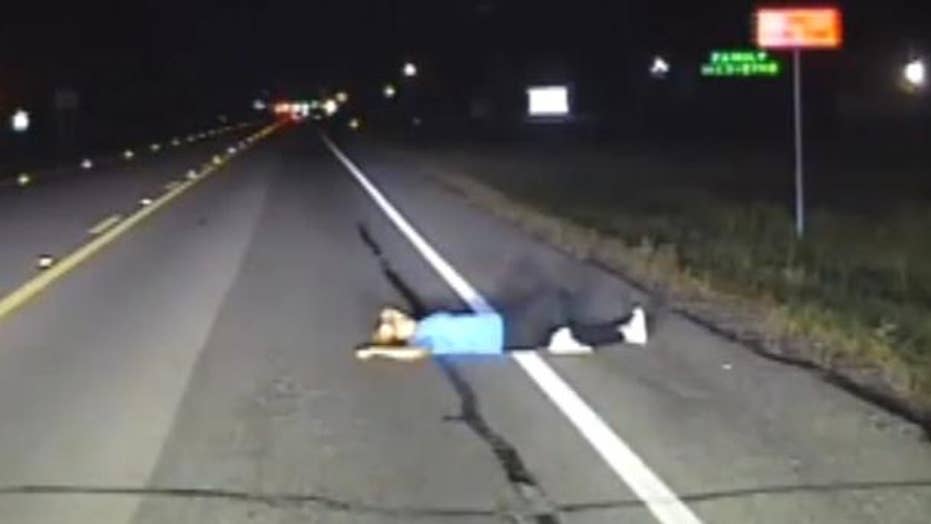 Near miss for woman found sleeping on road in Texas

Police dashcam video shows a woman found sleeping on a road in Fulshear, Texas, narrowly escaping being hit by a vehicle.

A woman who was believed to be intoxicated narrowly escaped death early Saturday morning after she was caught on video sleeping on a Texas road as a vehicle swerved to avoid running over her.

The woman, identified as Jeanette Murillo, was spotted “napping” on FM 1093 in Fulshear, west of Houston, after Sgt. Charlie Scott happened to drive down the road that morning. Police said she apparently ended up on the road after she got her car stuck in a ditch about 200 yards from where she “bedded down,” officials wrote in a Facebook post Tuesday.

The woman was found lying on the road, where cars were seen swerving to avoid her. (Fulshear Police Department)

Dashcam video showed Murillo, wearing a blue shirt and black pants, lying about halfway on the right side of the road.

“Thankfully, Sergeant Scott happened to be on patrol at the right time and in the right place,” police wrote in the post. “In the video you see the car in front of Sergeant Scott's police car swerve to avoid an object in the road.”

The officer soon realized the “object” was a person, slammed on the brakes and got out to help Murillo. Video showed Sgt. Scott speaking to the woman, who eventually woke up and moved off the road.

The woman was arrested for public intoxication.

Police described the incident as “being in the wrong place at the right time.”

“However, this unfortunate mistake could have ended tragically and the ride could have been to the morgue,” police wrote.