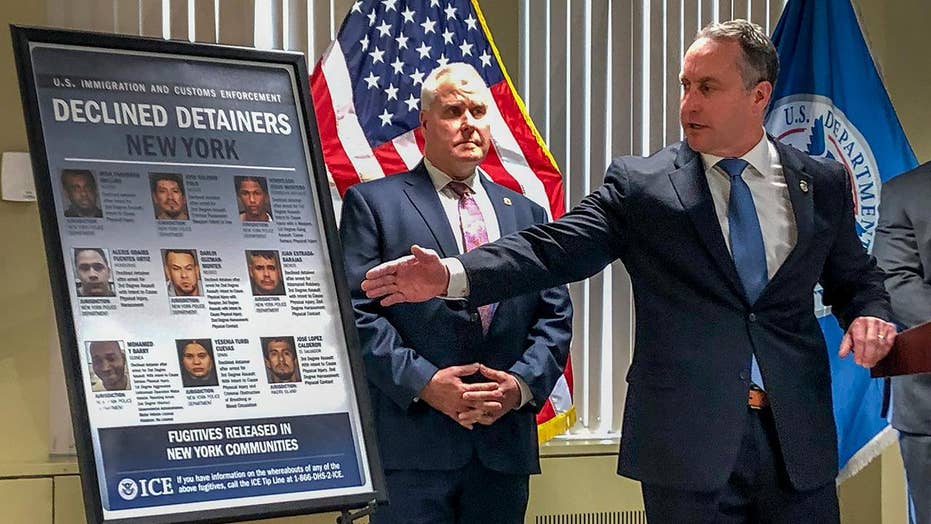 U.S. Immigration and Customs Enforcement (ICE) reported on Wednesday that hundreds of Orange County Jail inmates on whom the agency had active detainers were re-arrested over the past two years on charges including rape, assault with a deadly weapon and child sex offenses -- after local authorities released them without notifying ICE.

According to county data, officials at the Southern California jail didn't notify ICE when it released 2,121 inmates with detainers on them over 2018 and 2019. Over that same period, another 1,315 were released "to ICE upon completion of their local sentences in accordance with" California's sanctuary regulations laid out in Senate Bill 54, an ICE press release said.

According to ICE, 411 of the released inmates have been rearrested and booked into the Orange County Jail on additional charges, which also include domestic violence, identity theft, and driving under the influence.

The agency's statement noted that number does "not account for individuals who may have been released and committed crimes in other jurisdictions."

Senate Bill [SB] 54, which became law in 2017, prohibits state and local law enforcement agencies from detaining illegal immigrants for violating immigration laws except in cases where they have been convicted of serious or violent felonies.

“SB 54 has made our community less safe," he said in a statement. "The law has resulted in new crimes because my deputies were unable to communicate with their federal partners about individuals who committed serious offenses and present a threat to our community if released.

“The two-year social science experiment with sanctuary laws must end. Rather than protect our immigrant community, the law has enabled offenders to be released, often times [sic] back into the immigrant communities they prey upon, and create new victims.”

Democratic politicians have argued that sanctuary laws help deter crime by building trust between law enforcement and immigrant communities. But according to Acting ICE Director Matthew Albence, those policies "do nothing but ensure that criminals are released back into the community, where many re-offend, instead of being turned over to ICE."

"These are preventable crimes, and more importantly, preventable victims. As the data released by Sheriff Barnes clearly demonstrates, all communities are safer when local law enforcement works with ICE," he added.

Last month, ICE similarly called out Cook County, Ill., accusing local authorities of denying more than 1,000 detainer requests. Those cases included the release of a South African national who was accused of indecent exposure and a Nicaraguan national who was arrested on charges of domestic violence.

Sanctuary policies have long been controversial but the issue resurfaced in January when 21-year-old Guyanan Reeaz Khan allegedly raped and killed 92-year-old Maria Fuertes after his release from a New York jail.

ICE claims it issued a detainer request for Khan after authorities arrested him for assaulting his own father. According to the New York Daily News, the NYPD denied receiving a detainer after that first assault.