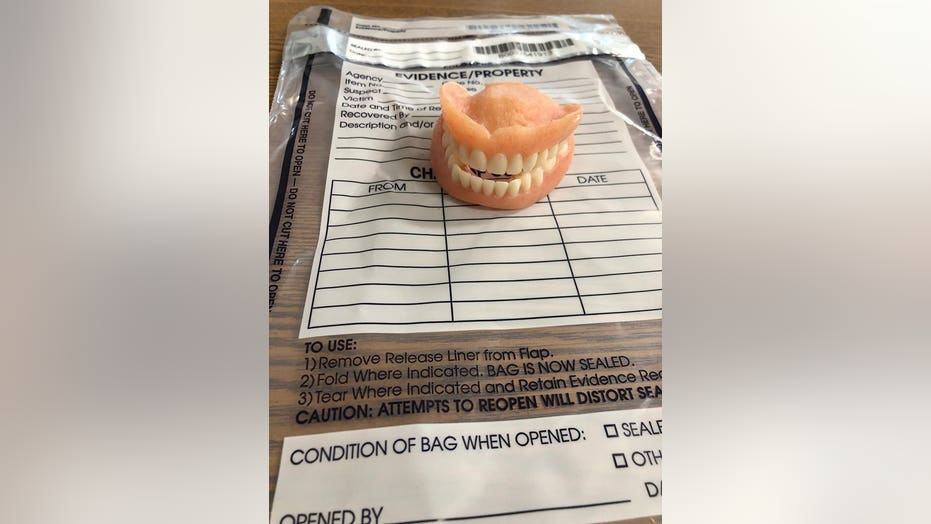 An Indiana sheriff's office took a "bite out of crime" Monday when they caught a woman wearing a set of dentures "that clearly were not hers" at her own probation meeting.

Earlier that day, someone reported that a woman, identified as Joann Childers, from Jennings County, stole her teeth and accused her of wearing them around.

A probation officer who later met with Childers said she noticed she was wearing the set of pearly whites, which "may be the stolen teeth."

A woman in Indiana allegedly stole someone else's dentures and wore them to a meeting with her probation officer on Monday. (Jennings County Sheriff's Office)

On Wednesday, officials spoke to Childers about the alleged denture theft. The sheriff's office wrote on Facebook that while speaking with Childers, a deputy saw the dentures in "plain view" inside her home — and they were even reportedly labeled with the alleged victim's name on it.

The sheriff's office also appeared to see the funny side in the incident, with a series of hashtags accompanying the post including, "#caughtwithoutmyteethin #takingabiteoutofcrime #gumdecision #illhavejailsoup #shesnotthetoothfairy".

Childers was charged with theft, according to officials, who added that the dentures were recovered.