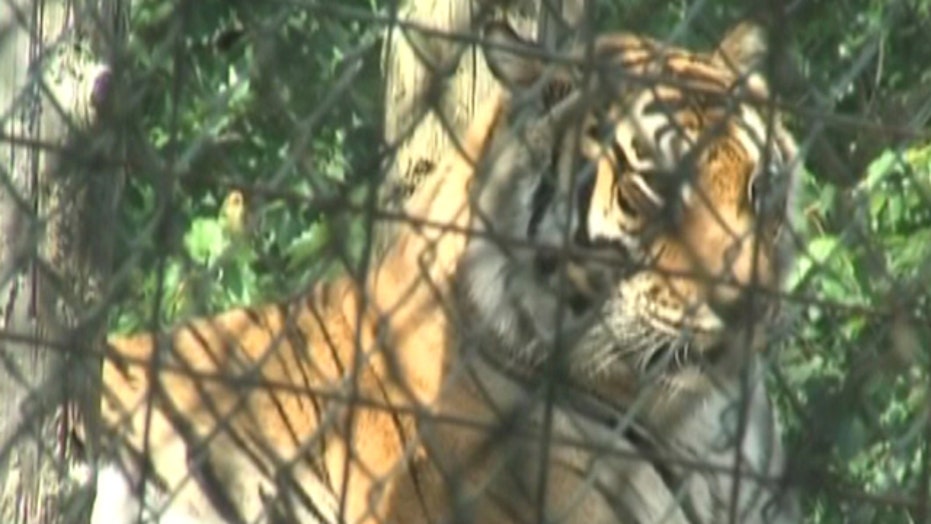 A worker cleaning a cage at an exotic cat refuge in western Indiana was critically injured Friday when she was attacked by a tiger that held her head in its mouth until co-workers were able to free her by spraying the animal with a hose, authorities said.

Marissa Dub was listed in critical condition Friday evening at Wishard Memorial Hospital, spokeswoman Natalie Moya said. Clay County Chief Deputy Rob Gambill said he was told Dub, who is from the Chicago area, has some cuts and bone fractures, but the injuries were not believed to be life-threatening.

Dub was working at the Exotic Feline Rescue Center in Center Point, about 60 miles southwest of Indianapolis, when the full-grown male tiger attacked. Gambill said the 21-year-old woman forgot to close a gate separating the cage from a holding area.

“She got to about 10 feet away from that opening when the tiger attacked her,” Gambill told Fox 59.

Dub was out of the cage by the time sheriff deputies arrived. Rescue center workers told authorities the tiger had been holding the woman's head in its mouth.

“The tiger was basically resting with her head in its mouth,” Gambill told Fox 59.

“They were afraid to rush in immediately because they thought that it might cause the together to become more aggressive and continue hurting her,” he said.

When the center's director, Joe Taft, saw that the tiger had loosened its hold a bit, he sprayed it with a water hose and the tiger released Dub, Gambill said. The workers used meat to lure the tiger back into the small enclosure.

Taft declined comment about the attack when reached by The Associated Press.

The U.S. Department of Agriculture, which regulates exotic animals, is investigating, Gambill said.

"They'll make the decision on what happens with the animal," Gambill said.

Taft said it was the first time anyone has been injured by an animal at the center, which opened in 1991, however Gambill told Fox 59 that a similar incident occurred 15 years ago. Gambill said an employee was working inside a tiger’s cage when the employee was bitten and dragged. The employee survived.

The center's website says it houses more than 230 exotic felines.